Good luck, Martin, or whoever gets the Ireland gig: it ain’t gonna be Woodstock, baby! 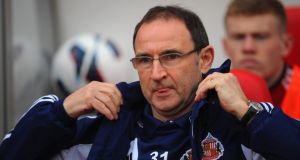 Martin O’Neill, or whoever gets the gig as next manager of the Irish football team, is going to get quite a lot of quids, but it’s hard to shake the suspicion that nothing else but perfection is going to keep the critics off his back once that initial burst of “new-era-fresh-start-everyone’s-shoulder-to-the-wheel” enthusiasm wears off. Photograph: Michael Regan/Getty Images

An old Irish Press colleague, the late Brian Featherstonhaugh, had an admirably straight-forward response to anyone ringing in complaining about mistakes in the paper.

Martin O’Neill or whoever gets the gig as next manager of the Irish football team is going to get quite a lot of quids, but it’s hard to shake the suspicion that nothing else but perfection is going to keep the critics off his back once that initial burst of “new-era-fresh-start-everyone’s-shoulder-to-the-wheel” enthusiasm wears off.

And wear off it will. There’s nothing surer.

In the last four decades of Irish football, Eoin Hand got shot down because he gave the players too much rein, and Jack Charlton didn’t give them enough: Charlton achieved, but not with style: Brian Kerr tried to provide a bit of style, and didn’t achieve: Mick McCarthy achieved, and with a little style too, but wound up vilified because he somehow objected to being called a “c***” by an attention-seeker incapable of diluting his hubris even a fraction.

Don Givens was in there too, briefly, and Steve Staunton also, but not briefly enough to stop him becoming a national punch line.

So as gigs go, it is definitely more Altamont than Woodstock; more end of the dream than peace and love.

Of course any job in football management is almost invariably a race towards redundancy. But the Irish job in particular comes with its own particular layers of complexity, the most consistent of which is the yawning fault line between expectation and reality, a line that inexorably leads back to Irish football’s default-setting of whining disgruntlement.

Attractive football
Giovanni Trapattoni made plenty of mistakes during his tenure with Ireland. Apparently he didn’t go to see enough matches. He didn’t get them playing attractive football, rubbed a few players up the wrong way too.

He also didn’t show much regard for the opinions of various media “Yodas” cueing up the usual cod-psychology and tired jargon about stifled creativity, failure of ambition, yadda-yadda-yadda.

But what shouldn’t be forgotten in the midst of this new post-Trap enthusiasm is how he didn’t get everything wrong, and his instincts about the fundamental capabilities of the players at his disposal were especially a lot more right than Wes Hoolahan’s Lonely Hearts Club band will ever concede.

Stating the blatantly obvious limits of your team’s abilities might not be particularly “on-message” in terms of “paaasitive” motivation, but it at least had the virtue of sparing players and public the overwhelming PR-coated shinola that inflates reputations almost to the same degree as Irish football’s expectations.

The Ireland team that played Austria contained seven Premier League players. Good players too. But players so superior to Sweden and Austria that defeat should be regarded with angry indignation?

Really? They’re that good? So good that losing by single goals to both Sweden and Austria means the automatic bullet? Really?

It’s come to something when England, normally the spiritual home of ludicrously inflated football expectations, starts to look realistic. But Greg Dyke’s recent sobering assessment of English abilities preceded an away draw with Ukraine that was greeted with relative satisfaction despite general recognition that the tactics involved basically consisted of “let-it-up-to-the-big-lad”.

What seems to escape Irish football’s professionally profound, though, is this is no aberration when taken in the context of the football culture in these islands.

“Let-it-up-to-the-big-lad” has always been our home-run-swing, a reflex gesture which inherently acknowledges that pretty midfield passing patterns might be a more productive route for players actually weaned on technical expertise rather than the frantic wham-bam of British league football.

Top Premier League sides mostly bypass that issue by importing creative midfield talent from around the world, not an option in international football, as every manager of every home country has quickly found out when confronted with the practical reality of actually trying to win games.

Here, Trapattoni’s reign was characterised by similar “caveman” stuff, apart from that now near-mythical one-off performance in Paris against a French team whose motivation, it quickly became clear, was infinitely more Vichy than Verdun.

At a fundamental level, there’s an arrogance about football in this country that trumps even England’s, and it’s based on the sort of delusion that believes Hoolahan, Andy Reid, Darron Gibson, Steven Ireland and others are somehow noble treasures too blindingly brilliant for a roundhead coach to recognise.

Irish football’s intelligentsia really seems to possess the hilarious conceit that Trapattoni, Capello, Hodgson – men who’ve all managed at the elite level of European football – resort to “let-it-up-to-the-big-lad” as a first choice: that Trap pulled the wool over the eyes of the entire football world for decades: that Capello, the man who coached van Basten, Maldini and Savicevic, is really a spoofer, incapable of recognising talent.

Really? They’re all wrong? Really? And here in Ireland, we’re all right? Has our insatiable appetite for dudgeon squinted perspective that much? Apparently so.

Ireland has produced elite midfield talent, the sort that can boss a game against anyone: Keane, Giles, maybe Brady in his pomp. But that’s three in 60 years.

Who do we have now? Hoolahan? A singular talent, apparently, who has managed to get to 31 years of age and is still parked in the relative outpost that is Norwich?

Good luck, Martin, or whoever gets the job. Whatever quids you get, you’re going to earn them.