Donald Trump hoping to rebuild Doonbeg and take on the snails

Vertigo angustior listed for protection under the EU’s Habitats Directive. 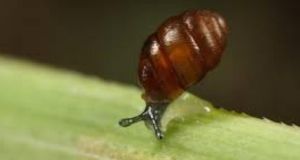 
Donald Trump is considering a complete rebuild of the links course at Doonbeg that could bring him into conflict with environmentalists over protected dunes and the microscopic snail that limited the original Greg Norman project.

Trump confirmed ahead of the WGC-Cadillac Championship at Trump National Doral in Miami today that British designer Martin Hawtree will either enhance the existing course or completely redesign a new links if plans to rebuild what is now called Trump International Golf Links, Ireland, prove feasible and get the green light.

“There are tremendous dunes there and they weren’t able to use them, which is sad,” Trump said of the original course design which was unable to use 51 acres of grey dunes that were designation as a Special Area of Conservation by the now defunct agency Dúchas. “It’s very sad for tourism.”

A microscopic snail just two millimetres high and one millimetre wide – Vertigo angustior - was discovered onsite during the developer’s environmental impact assessment and listed for protection under the European Union’s Habitats Directive.

However, Trump believes that the battle with the snails is not over and he may well take it on with Hawtree, rather than Norman, at the helm.

Incredible job
“Greg Norman did an incredible job considering that he wasn’t allowed to work in the dunes and we are using that course and changing it,” he said of the course which suffered an estimated €1 million in storm damage and coastal erosion earlier this year.

“I have a lot of time and I have a lot of money and the best thing for Ireland is that you allow that great site to have one of the great courses of the world.

“And I have hired for that purpose, Martin Hawtree, to study it.

“We are not talking about an endangered species. And they were restricted from building a great course because of that.”

“If a microscopic snail that’s all over the world can hold that up, I would think Ireland would not be happy about that and I would think they would be on my side.”

Trump is concentrating his European investment in Doonbeg, which he purchase for a reported €15million last month having decided not to build a second course at his Scottish links resort near Aberdeen having failed to stop plans for a proposed wind farm there.

Focusing on Doonbeg
“Until they give up that charade of these ugly turbines that kill all the birds and probably make people sick with the humming noise and just destroy the environment, until they give that up . . . I’m focusing our efforts on Doonbeg in terms of Europe,” he said.

“I said I’m going to build a second course and other things (in Scotland), when they abandon that nonsense of the wind farms.

“In the meantime, I bought Doonbeg, and I’m sure Scotland is not exactly thrilled about that; I can tell you for a fact they are not.”

As for a planning application, due for decision on March 30th, by Clare Coastal Wind Power Ltd to erect nine 85m wind turbines 2kms south of the village of Doonbeg, Trump is not concerned.

“There is a plan for a wind farm but I think the people of Ireland and the representatives of Ireland are too smart to allow that to happen,” Trump said. “It will kill tourism.”