‘It was probably the toughest part of my career, in fairness my life in general’ 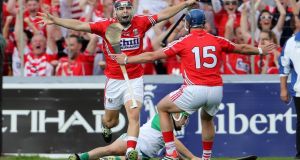 For a fortnight last January, Paudie O’Sullivan sat in St James’s Hospital in Dublin, each day bleeding into the next with no firm word on when it would end.

The nightmare that had begun eight months beforehand with a broken leg in a club match was continuing, as one of the pins that had been inserted during surgery had become infected. Whatever he felt about his future, scoring the sealing goal in this summer’s Munster final seemed a ludicrous thought just then.

He ended Sunday’s game with 1-1, coming off the bench at half-time for Pa Cronin. The Cork captain, incidentally, looks due to miss a good portion of the rest of the summer after Jimmy Barry-Murphy confirmed that he cracked a bone in his leg. O’Sullivan can at least show him that there’s a way back from much worse.

“We’re a long distance now from last November, December and January when I was running around the steps of the stadium here with Declan O’Sullivan,” said O’Sullivan. “On my own in the lashing rain and wind and everything. To be in this situation now with a Munster trophy on board, you certainly couldn’t have dreamt of that back then.

When he says everything that could go wrong did, he isn’t kidding. O’Sullivan is still just 25 but already his is a hurling life into which plenty of rain has fallen. He did his cruciate in 2007 and missed the usual year on the back of it. When word came through in April 2013 that he’d broken his leg playing for Imokilly, it was assumed that he’d be back within six months or so. Not to be.

“First off, one of the bones never healed properly. I had an operation in late November with that and unfortunately then in January one of the pins that went into my leg got infected. I spent the best part of two weeks in a hospital in Dublin, all on my own, no one around, no friends, no family, nothing. That was probably the toughest part of my career, in fairness my life in general. Not knowing whether I’d make it back.”

Did he lose faith?

“Yeah, I think to be honest I probably did. Those two weeks in Dublin, not knowing when I was getting out of hospital, not even fully knowing why I was in there in the first place. It’s a long way from home, not knowing anyone and no one really coming to visit because they weren’t sure how long I’d be in.

“Yeah, without a doubt, definitely. With an infection like that, it wasn’t even a hurling scare, it was a life scare in general. I suppose it puts everything into perspective when you’re sitting up in a hospital bed. Obviously there were people far worse off than me.

“But I think it definitely got me back my love for hurling. It took me back a small bit to my childhood when all you want to do is hurl. Like, what I would have given to be on the pitch, out training with the lads. To be back here just a few months later is absolutely unbelievable.”

His 1-1 contribution off the bench on Sunday went along with the two points scored against Waterford and a point against Clare. When put it to him that he runs the risk of being considered an impact sub, he brushes it off: “Well look, to be honest the way I look at that is that 12 months ago I would have taken anything. If you want to call me that, I don’t mind, I’m honestly not bothered. It’s all about the team. Cork won the Munster title today and that’s all that matters to me.”