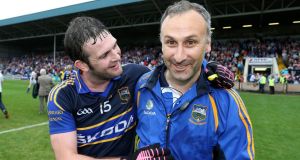 Of all the Tipperary supporters converging on Tullamore this evening, one man is taking particular joy from their eye-catching run through the All-Ireland summer.

When Declan Browne was one of the most incandescently skilful forwards in the sport, it was generally considered his misfortune that he hadn’t been born further south so he could have picked up a trove of All-Ireland medals with Kerry.

It was never a sentiment that Browne shared: a dual player, he was in the extreme minority in caring more about Tipp football than hurling and managed to win two All-Star awards despite the brevity of Tipp’s football summers.

There is a sense that Tipperary’s time as a football county has finally arrived but even as Browne enjoyed the half-time applause given to Peter Creedon’s team following their blistering show against Laois, a curious thought struck him.

“The last two games were double-bills with our hurlers and I genuinely believe that a lot of the hurling people at that Laois game didn’t realise how good our football team was. They played unbelievable stuff in the first half and got a standing ovation coming off which probably backfired a small bit. They went into the shell then a bit.

Of course, as Browne well knows, sometimes ‘deserve’ has nothing to do with it. Tipp probably deserved to beat Cork in the opening round of the Munster championship this year. “That bit of naivety cost us,” says Browne. It has happened before.

But Browne feels that that football has a more consistently high profile within the county now than it did when he played.

When Tipperary won the Munster U-16 championship last week, it meant another generation of young footballers coming through without any fear of what playing Cork and Kerry meant.

That alone is something Browne finds hard to comprehend.

“When we played, you were written off automatically and that does creep into your mind. The beauty of it is that this bunch couldn’t care less who they play.

“This year we are going about it the right way but Saturday is going to be a bigger test and I think we need to take out a big gun to really drive home our progress.”

As selector Paul Fitzgerald remarked recently, Tipperary football is always going to have to battle against tradition if they want to progress. They have already managed that spectacularly at underage; the Dublin team which the Tipp minors, managed by David Power, defeated in the 2011 All-Ireland final contained Jack McCaffrey, Ciarán Kilkenny, Paul Mannion and Cormac Costello.

And Peter Creedon, a Cork man long domiciled in Tipperary, has done a marvellous job of making Tipp football players play and conduct themselves as if they have the right to take on the best. Browne has watched Creedon’s work up-close and is impressed.

“I put a lot of it down to Peter. He had a lot of these guys since minor and they know what he wants and he knows their capabilities are.

“If you want to play with the big boys, the gung ho style may not always be the way to go. I do think that this is a great draw for both Tipperary and Galway. They will both fancy it and will both go for it.”

There is nothing flash-in-the-pan about Tipperary this season. They have posted consistently big scores in the league on their way to promotion and have maintained that through the summer.

Apart from anything else, they are fun to watch and have placed faith in their ability to outshoot other teams.

Conor Sweeney has carried his impressive league scoring spree into the championship, matching Cillian O’Connor at the top of the scoring table with 3-15, 3-07 of which has come from play.

Creedon, always deliberate in his pronouncements, acknowledged that his team will take “a bit of beating.”

This is new ground for them. Some are tipping them to beat Galway, a fact that won’t go unnoticed in the west. That expectation can bring its own pressure.

“It depends how the lads react too. It is live on Sky and all so that will be new but they are used to that from their minor final days. If they don’t take their eye of the ball and the job that we are supposed to do, I feel they can win. In order to make progress, we do need to beat a big team and Galway are a big football county.

“So regardless of what happened in Croke Park in the quarter finals, to get there in itself would be massive progress for us and we can look forward to next year.”