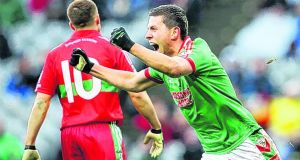 Romance is no stranger to AIB club finals but even by those standards yesterday’s riveting football decider was pure Hollywood. Seven times Roscommon champions have reached the final and seven times they have returned across the Shannon empty handed.

Yesterday the script finally changed and with a narrative that even the chintziest film producer would have rejected as preposterous, as St Brigid’s –themselves one of the disappointed seven, two years ago – capped an extraordinary comeback when the veteran Frankie Dolan kicked the winning score in the dying seconds.

Ballymun Kickhams came into the match not having conceded a goal since the county championship. Their relentless athleticism had swept away Dr Crokes in the semi-final and in the opening 10 minutes, they exploded onto Croke Park, pillaging 2-3 with just a solitary point in response.

Somehow from this most daunting of scenarios, Brigid’s plotted initially damage limitation and eventually salvation.

When they deposed their predecessors Crossmaglen in the semi-finals the Roscommon team had kept the match on a tight leash and, in the only resemblance to yesterday, edged in front at the end. This time they had a wholly different challenge to meet.

Inevitably when a team wins in such adversity they have their heroes. For much of the afternoon, Senan Kilbride gave Seán George, whose close marking of Colm Cooper had been such a feature of the semi-final win, a miserable time. But it was in the early stages of reconstruction that Kilbride’s influence was most felt and most needed.

Having equalised Ted Furman’s opening point, the Brigid’s full forward stepped in after his team had fallen eight behind to finish a 12th minute goal and start the process of recovery. His finishing total of 1-3 and an assist for Karol Mannion’s second-half goal were critical contributions.

Mannion himself, who was declared TG4 ’s Man of the Match, scored 1-2 and played a massive role in enabling his team largely to control centrefield. Then in the second half, wing back Ronan Stack made two exceptional interventions – the first intercepting a 48th-minute fisted pass that threatened to send Dean Rock free on goal and five minutes later getting a hand in when Furman – Ballymun’s most dangerous forward – was weaving in towards goal and dispossessing him.

It all started so promisingly for the Dubliners, who got off to a blistering start with two goals in the opening six minutes. Dean Rock got the first – rising in the second minute to flick home a cross from Jason Whelan and four minutes later, Philly McMahon was on hand to fire home the second after good work by Furman.

Inexorably, though, there emerged indications that not all was well. James McCarthy, whose high-tempo movement is so important to the side, was clearly impaired by an ankle injury, which required pain killers. As a result his ability to glide at pace through the middle was so inhibited that he sought off-loads as a first option in nearly all circumstances.

The defence, which had been razor-sharp in its focus in the semi-final, looked at sixes and sevens – struggling under the high ball and never managing the powerful collective synchromesh that had shut out Dr Croke’s. In fact Mannion’s point in first-half injury-time came directly from Ballymun’s inability to complete a sequence of hand passes by clearing the ball.

As against Crossmaglen, the Connacht champions applied themselves industriously to hindering the smooth running of counter attacks from the back.

Philly McMahon’s digitally accurate kick passes that had opened up Croke’s like a scalpel also went awry in the early stages and there were unmistakeable signs of unease even though Ballymun were sitting on a good lead.

On the line Kevin McStay and Liam McHale were quicker to address their issues than Paul Curran – who was reliving the nightmare of his playing career when Thomas Davis lost the 1992 final also by a point. They shifted Darragh Donnelly to centre forward to reconfigure the attack whereas Ballymun took longer to bail out George in his travails on Kilbride.

It was Kilbride who popped in the ball for Cathal McHugh to break, allowing Mannion swoop and fist the second goal, which equalised the match in the 38th minute at 2-7 each, the second breach of the Dubliners’ previously impenetrable defence.

Although James Burke, whose intelligent support running yielded two points from wing back, restored the lead Brigid’s hit back within a minute – as they did six times during the match.

Dolan was now to the fore. He equalised Burke’s point, restored the lead at 2-10 to 2-9 in the 46th minute and after Jason Whelan had levelled nine minutes later it was he who had the last word.

The match had still been there for Ballymun but missed frees by Rock and Whelan would prove costly and when their last attack got turned over by Niall Grehan, they were forced to pay the price.