On the tenth anniversary of the term ‘puke football’, why are Tyrone still seen as the black sheep? 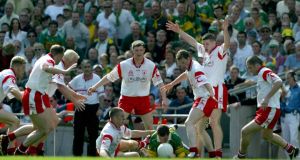 Tyrone defenders swarm around a Kerry player during the 2003 All-Ireland semi-final at Croke Park. Tyrone won 0-13 to 0-6 and went on to defeat Armagh in the final. Photograph: Morgan Treacy/Inpho

Pat Spillane didn’t know what he was going to say but he knew he was going to say something. Knew he had to. Knew he needed to place on public record the fact that this was no ordinary outrage that was tugging at his sleeve. The afternoon and early evening had passed since Tyrone had beaten Kerry and ever since early in the first half, Spillane had boiling up . Come showtime, he bubbled over. Michael Lyster asked him for his reaction and he plucked from thin air the two words that have followed him ever since.

It is 10 years to the day since the phrase tumbled from his lips. August 24, 2003 – Tyrone 0-13 Kerry 0-6. Páidí Ó Sé’s side fed through the mincer, covered up by a blanket defence made of steel wool. Séamus Moynihan shaking his head and saying it was like Times Square out there. And Spillane, with a seat on the Sunday Game couch that night, let slip the dogs of war.

On air
“I don’t know where it came from,” he says. “It wasn’t a phrase I had heard, it wasn’t something that I prepared. I did have this feeling of anger at the way the game had gone and the build-up inside me since the end of the match meant that once we went on air, I knew I would have plenty to say. But it wasn’t like I thought of the phrase beforehand.

“That isn’t how it works. I would say that at least 99 per cent of the time, I’m talking straight off the top of my head. That’s the way I’ve always done things. I scored a goal against Tyrone in 1986 where I palmed the ball to the net. I had never attempted a goal like that before and I never did it again. It was purely what occurred to me in that split second. The puke football thing was like that. I just said it without thinking.”

Strip away emotion and county fidelity and it’s actually a magnificent phrase. It doesn’t make grammatical sense yet you know perfectly well what it’s getting at. Two nouns thrown out side by side – vomited out, almost – its author so apparently enraged that he had neither time or mood to arrange them properly.

If he’d said “puke-inducing football” or even “football to make you want to puke”, chances are it would have just been tossed on the pile of disposable Spillaneisms. But puke football endures, a killer soundbite worthy of the darker corners of the oeuvre of a Peter Mandelson.

Positive things
“And I never said it again!” he says. “I said it once and never again except when people brought it up. I would genuinely say that over the years, I have said multiple times more positive things about Tyrone than negatives. They won three All- Irelands playing some excellent football and I have praised them countless times. But no one listens. All people remember is puke football.”

In the 10 years since, Tyrone have had plenty of cause to hold it against him. As Enda McGinley pointed out during the week, they’ve been involved in a fair percentage of the best matches of our time yet it’s no generalisation to say that the overwhelming majority of the GAA public at the very least take a dim view of them.

“Puke football” has been a label stuck to the side of their suitcase throughout a decade’s travel, as if they are some way worse than everybody else.

At the Tyrone press night last week, someone informed Mickey Harte that Seán Cavanagh’s rugby tackle had seen him compared to Lance Armstrong in terms of being a cheat. Another questioner framed Tyrone as Millwall – no one likes us, we don’t care. Harte chuckled sadly and shook his head both times, declaring it regrettable that it has come to this.

Yet it’s worth examining why and how they became the black sheep. And be in no doubt – that’s how Tyrone GAA people feel they’re perceived. It started with puke football, it carried on through the Battle of Omagh and John Murray and Derrytresk and more. It might sound silly beyond the county boundary but inside, it has long been an article of faith. Picked on, singled out.

“The Conor Gormley thing made people just go, ‘What a waste of time,’” says Ryan McMenamin. “They waited 10 days to suspend him and then they threw it out within 48 hours. Why do that? Why bother? Tyrone people look at that and just feel like they’re being picked on and that they’ve been down this road before. They’re well used to criticism by now.”

McMenamin freely concedes Tyrone haven’t helped matters at times. Their football under Harte has always been in-yer-face and ex-players from other counties have had plenty to say about how they’ve conducted themselves.

Oisín McConville was scathing about McMenamin and Gormley in particular in his book over the verbals he was subjected to in Armagh v Tyrone games down the years. Nobody doubts his bona fides or imagines he was the only one.

But even that doesn’t explain the level of distaste for Tyrone football in the south. They’ve always been physical but no more so than Seán Boylan’s Meath. And as every shade of the cynicism debate has been played out over the past three weeks, the one thing we can surely agree on is that they didn’t invent it. That they’re arguably better at it than most can’t be reason enough for the fatwa.

McMenamin puts some of it down to their own attitude, which from the outset was confrontational. They got off on the wrong foot and never quite righted it.

“Northern people have probably been a bit paranoid down the years. The Northern mindset is complicated because the Troubles probably made a lot of people feel like you are out on your own. You do fend for yourself. You do fight your own corner. There’d be a bit of everyone that kind of goes, ‘Well no one likes us. They think of us as different. They don’t count us as Irish.’

Army checkpoints
“We would definitely have had this idea that people in the south didn’t really understand where we were coming from.

“I remember as a wee boy going to the Ulster final in 1989 between Tyrone and Donegal. Clones from my house is maybe an hour’s drive but in 1989, you’d be leaving the house at 10 o’clock in the morning because crossing the border meant police and army checkpoints that took two or three hours to go through. And the same again that evening, meaning you weren’t home until 11 at night.

“People in the south probably didn’t realise what a struggle it was for us to just get playing GAA on the same level as them.But that was part of what made us into the people we were and it feeds into the mindset of a lot of people in the North. Part of us would have been thinking that we fought just to get playing Gaelic games and then when we arrived down to the south, the people who were meant to be the same as us didn’t seem to understand what we were about.

“It wasn’t as though we were expecting a welcome mat laid out for us but it was strange to feel as though we were different in some way. After a while, you just go, ‘Right, if that’s the way they see us, fair enough’. There wasn’t outright hostility but I suppose the more competitive the football got, the more hostile the whole scene got . . . . But that’s just sport really.”

Constant presence
It’s a shame because in the end, Tyrone do their business just as most counties do. Their centre of excellence in Garvaghy is a credit to all concerned, their constant presence at the business end of the various underage championships a nod to the lessons others can take from them. Even Spillane has found attitudes to him changing among Tyrone people – although mostly as a consequence of them having Joe Brolly for a voodoo doll now instead.

“Look, Tyrone have played the game a certain way and at times it has been based on stopping the other team playing,” he says. “It started against Kerry in 2003 and at different times over the years, they’ve gone out to be negative and to keep games tight so that they might win it in the last 10 minutes. But are they more cynical than the vast majority of counties? Absolutely no way. Is their tackling more illegal than the vast majority of other counties? Absolutely no way.”

So there you have it. Tyrone no more pukey than the rest, says the papa of puke football himself. What you reckon, Ricey? “Sure you wouldn’t want to be listening to Spillane, would you?”