Mayo may feel they can now cast off their inhibitions

After a Castlebar nightmare, Mayo had to reconfigure their strategy to cope with Dublin’s scoring bursts 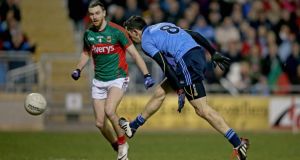 It took just four minutes for Mayo’s worst fears to come to fruition last Sunday. The ease with which Paul Flynn hot-knifed it through their defence to win the penalty which led to Dublin’s first goal was a stark example of the very threat that the Mayo team selection had been designed to prevent.

Flash back to the middle of last March. Everyone remembered that Dublin had come to Castlebar for a Saturday night match and spent the evening toying with and teasing the home team. But in the subsequent months the details became blurred.

In the build-up to the All-Ireland semi-final, the score line – 2-18 to 0-10 – might have been quoted in articles and on radio shows. But so what? League fare is characterised by strange and lopsided score lines.

Still, it wasn’t so much the margin of the beating as the way that Dublin set about their business which made the match significant.

“It was a complete reality check for us,” said Lee Keegan as he trooped off the field.

Former Mayo forward John Casey estimated the crowd at 16,000. It was hardly a game which Mayo had planned to coast through. The late inclusion of Paul Flynn and Dermot Connolly to the Dublin starting line-up was a sign that the Dubs were out to win the match. So it went.

Dublin went down a couple of gears in the second half – with the conspicuous exception of Denis Bastick, who played like a man possess all through.

Jim Gavin’s reaction was more interesting as he sought to play down what was a glowingly handsome performance by his team.

“When you get beaten like that there will be questions about how you set up,” was manager Pat Holmes’ assessment of the night.

Those questions might well have bounced around the walls whenever the Mayo management sat down to discuss the best way to progress. One of the forgotten features of that match was that the advanced role handed to Aidan O’Shea was quickly abandoned as the Breaffy man was required to drop into a deep centre-field role to try and plug some of the huge gaps which Dublin’s strike-runners were exploiting for fun.

When Mayo’s championship campaign began in earnest there were two obvious talking points after their win over Galway: the frightening potential of O’Shea as a traditional ball-winning full forward and the concession of two goals to the home team.

The selection of Barry Moran as the first tall-man sweeper that the game has seen was a bright move for which they were rightly lauded. But in the build-up to the All-Ireland semi-final conversation again turned to that cold night in March.

“Well, we didn’t legislate for what happened that night. We had got two points in Derry and had a six-day turnaround. We didn’t train particularly hard in the league given that they boys had been on the road for four extremely tough years. Now, Dublin came to Castlebar that night wanting and needing two points, and they came with a huge intensity, and we just weren’t up for it on the night and they blew us away.”

By then the Mayo management had presumably begun to reconfigure their strategy to cope with Dublin’s capacity for devastating scoring bursts. Barry Moran was among the players who featured at a press evening and discussed the difficulty of nailing down a starting place in the Mayo line-up. It was either a brilliant disguise or prophetic: Moran’s impressive turn against Donegal didn’t prevent management from replacing him with David Drake, a debutante, in a switch that nobody saw coming.

That switch and defensive diligence with which Mayo started out last weekend was specifically designed to prevent the kind of scoring rush which Dublin had enjoyed in Castlebar. And yet here was Flynn on the end of a goal-scoring opportunity in what was one of Dublin’s first meaningful forward thrusts.

As it happened, the goal did not have a significant influence on the pattern of play which followed. Dublin played some nice football, but fitfully.

Mayo stuck around through the frees of Cillian O’Connor and collective grit. But they were, by their own standards, conspicuously inhibited in their general approach. They didn’t push forward in numbers and seemed caught in two minds as they set up to face Stephen Cluxton’s kickouts. It was as if they wanted to try and apply more pressure but couldn’t convince themselves to do it. Was that early penalty and the memory of what happened in Castlebar weighing on them?

“We did it only occasionally in the first half and we got joy. It was a tactic we spoke about at half time. Maybe we should have got more out of it. You try zonal marking or you press in. If you leave the zones free they had four men in the full back line in the first half. It is whether or which. Maybe next week we will have to press up. I know it doesn’t look good from a supporters’ point of view but it is as a 72 minute game and it is the end of that which counts. We felt that was the best policy.”

One of the most significant statistics of the second half was the 15-minute spell during which Mayo held Dublin scoreless. It offered them substantive proof that they were beginning to get to grips with Dublin’s attack. The timing of Kevin McManamon’s second goal – originating in a quick restart from a free kick which several Mayo men had protested – and the subsequent rush of points disguised a multitude of problems for Dublin.

Critically, it also clarified the best policy for Mayo to pursue for what remained of their All-Ireland championship. Moran, on eventually making an appearance, made the most important catch of his Mayo career in the 67th minute, winning a ball, a free and the removal of Bastick through a black card.

Dublin had to play without both senior midfielders through the seven-minute maelstrom which Mayo summoned from nothing.

The option to further test the resolve of Dublin’s fullback line by placing Moran alongside Aidan O’Shea in the full forward remains an option for Mayo now.

But their erratic scoring pattern – 0-1 from play in the entire first half; 0-4 (as well as the penalty) during the spell when they went from broke – poses the key dilemma for them.

They have faced down the furnace of Dublin’s championship game now. They have coughed up two goals and lived to tell the tale. They know that Dublin will be without their most potent outfield scorer, Dermot Connolly, this evening. The big question for Mayo now is if they want to play at their most instinctive and just go for it.