Longford pull off the shock of the championship so far 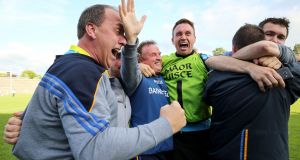 A goal by Robbie Smyth with eight minutes of normal time remaining catapulted Longford to victory over last year’s Ulster champions Monaghan in Clones on Sunday.

Longford got off to a flying start with a goal by their captain Michael Quinn after three minutes, giving them a foothold that they built on for most of the first half.

And it wasn’t until the latter stages of the half that Monaghan came to grips with the situation. Trailing by five points entering the final 10 minutes of the first half, Monaghan then hit a purple patch that yielded an unanswered 1-5, corner back Colin Walshe with the goal in the 34th minute. That sent Monaghan in with a three point lead at the interval - 1-9 to 1-6.

Upon the resumption Longford quickly began to reassert their superiority and they were level again by the 44th minute before retaking the lead by the 53rd minute with a point by full-forward Brian Kavanagh.

After plenty of yo-yoing Monaghan fought back to parity with 12 minutes of normal time remaining but a hungrier Longford punished the tired Northerners with Smyth’s decisive goal, and a point to seal a memorable victory.