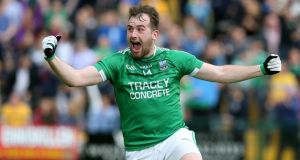 Fermanagh stunned Roscommon with six points in a stunning last five minutes to earn their spot in the last 12 of the football championship.

Roscommon looked certain winners when Ultan Harney put five between the teams in the 65th minute, but the final kick from Fermanagh was unstoppable.

Even in the third minute of injury-time a home win looked unlikely, but Tomás Corrigan levelled the game with 30 seconds remaining with a brilliant sideline kick from the right. And from the restart Fermanagh won possession, fired it straight into Sean Quigley and the powerful full-forward pointed the winner.

It was the first time that Fermanagh led in the game and it was desperately tough on John Evans’s troops, but the home manager was delighted with the character his side showed.

“Sean was struggling with his game in the first-half but in fairness to him, the penalty, the 45 and then the winner. After a torrid time he still had that mental resilience and strength to pull himself together and get those critical scores,” said Peter McGrath.

“Then Tomás Corrigan from the sideline and the other frees he took, ice cold, ice cold.

“That’s what all teams need. Men that can step up and take their pressure, take the free, take the score and get us over the line.”

It was ironic that Quigley kicked the winning score after the shocking first-half he had put in. Much was expected from the powerful man after he kicked 14 points in last week’s triumph over Antrim, but yesterday he kicked six wides before the break and one free as his side trailed 0-9 to 0-4 at the interval.

Cathal Cregg was the main fulcrum of the Roscommon attack and he kicked four points throughout, but too often he cut a lone figure up front as the Rossies dallied on possession and often failed to break out of defence fast enough to catch our Fermanagh.

Ryan Jones and Damien Kelly also kicked crucial scores in the final minutes for the home side, but it was a remarkable comeback.

Considering that Roscommon led by six points on three different occasions, and by five with as many minutes remaining, Evans will wonder how they failed to hold out for the win.

“I was just talking to the players there and we are absolutely gutted. We certainly didn’t see that coming in the last four or five minutes,” said Evans.

“They kicked unbelievable points there towards the end, from the sideline and there was calls that were going against us that we thought we should have got.

“That is what happens, that is why the home venue is so, so, so important to the team that gets it.”