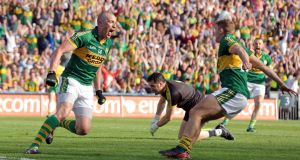 Sunday in the September sunshine at Croke Park and the masters reveal themselves in traditional colours but in brand new ways. Old heads and new tricks ended in the most familiar tableau in football: Kerry and Donegal made it to this year’s final by winning two of the most glorious semi-finals ever witnessed.

Their direct collision made for a bruising and tactically conservative encounter but it was Kerry, as so often before, that found a way. Senior and minor champions of the land. Sam Maguire wintering there for the 37th time.

“It’s a great day,” said Eamonn Fitzmaurice, Kerry’s quiet-spoken manager who this summer plotted and pulled together a championship coup which echoed the first coming of Mick O’Dwyer’s 1975 youngsters. It finished 2-09 to 0-12: a prosaic scoreline but a cherished win.

Just like that, the empire strikes back. On a suffocating day on the big field, a half chance was going to break this final open and so it went.

Goalkeeping is a savage business. Just a few weeks ago, Paul Durcan was the hailed as savour against Dublin after a brilliant save. Yesterday, he was inconsolable after his short kick-out brought about the goal which burst this exercise in caution wide open.

Big Kieran Donaghy has the wing-span of an albatross and the eye of sharp shooter. He read the Donegal man’s kick out, got a paw to it and all of a sudden was bearing down on goal. Old habits die hard.

For most of the summer, the loping Tralee man had been the forgotten man of Kerry’s championship campaign, a distinctive silhouette on the Kingdom’s bench. In the past month, he more or less changed the course of the championship. metamorphosis

“I knew it was a golden chance and you have to take them,” he said. “The way I was looking at it, it meant we were three points up. It felt like it was 0-7 each for about three hours to me out on the field. I thought it was never going to change.”

So did most of the country. Fitzmaurice and Donegal’s Jim McGuinness lay defensive patterns that the game’s most gifted forwards could not breach for long periods. Kerry goals stung Donegal into their only bursts of sustained attacking play. Neil McGee, immense all day in his dual with James O’Donoghue, strode along the wing to clip a point which left just a single score in it again. It was gripping and grinding as the shadows lengthened.

But Kerry’s poise and sense of manifest destiny was increasingly evident at this stage. All afternoon, they had woven little webs of stubbornness and guile which the Donegal men could not break through. Aidan O’Mahony made it his business to worm his way into Michael Murphy’s subconscious, hustling the Glenswilly superstar towards the margins for too long. Murphy still managed to produce the outrageous but not often enough for Donegal.

Peter Crowley, the brilliant Paul Murphy and Johnny Buckley closed down the middle third of the field, the launching pad for Donegal’s raids. When Patrick McBrearty got hot, Kerry double teamed him. If Anthony Maher and David Moran, the midfield colossi, couldn’t land the points of other Sundays, they still soared and bullied the skies. Big Neil Gallagher had a heroic hour for Donegal trying to fight against that axis but Kerry owned the middle.

And the habitual champions worked their way through what space was available and put some daylight between themselves and their northern counterparts again – a great point by Buckley, a crafty free by BJ Keane and another contribution from big Donaghy in the 61st minute.

Time was against Donegal now. They were in the place they hate most: chasing the game. Kerry played keep-ball, flinging the ball around the sumptuous green of Croke Park while the sunshine fell. They looked like a bunch of lads passing a Sunday on the village green. But, of course, this was title number 37 in the making: in September, Croke Park is their village green.

Donegal were bamboozled, their artful running game denied to them.

“We lost the game over seventy minutes,” said McGuinness. “We looked lethargic and didn’t spark into our usual rhythm.”

What did not desert them was the manic courage and still they pressed deep into injury-time the entire stadium rumbled as Murphy bore down on goal like a Panzer tank, mowing down the Kerry back line before flicking a ball to McBrearty. Time slowed down. His shot was deflected: Donegal’s dream disappeared when Colm McFadden dived and got a palm to the ball only to see it clip off the post.

So it came down to inches. In the All-Ireland championship, inches give way to years and to life times. Kerry have won All-Irelands in all kinds of fashion but yesterday they showed their appetite for the new order of strategy and mutual cancelation and patience. They did not blink. They showed the country why and how they divine so many of these days into their shape and sound and likeness.

“It wasn’t expected,” said Fitzmaurice before lauding his players again. “It is a privilege to work with them. I am lucky. I am haunted. It’s been a great year. Don’t forget the Hogan Cup.”

Kerry. You forget about them at your peril. From nothing, a perfect season.