Fenton and Clifford win Footballer of the Year awards 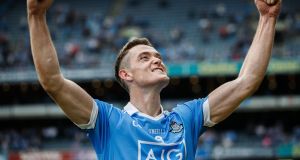 Dublin’s Brian Fenton has yet to lose a championship match.

Dublin centrefielder Brian Fenton was named Footballer of the Year at the PwC All Stars presentation on Friday night.

Fenton, 25, also won his third All Star in four years and since his debut in 2015 the county has won four All-Irelands in a row and he has yet to lose a championship match.

His ability in the air has marked him as the best operator in his position in the current game but with 1-13 from play this summer he also scored more in the football championship than any previous centrefielder.