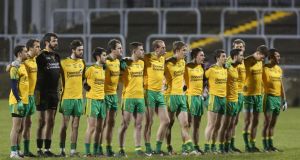 The Donegal players during the National Anthem before their victory over Derry. Photograph: Lorcan Doherty/Inpho

Donegal turned around a first half deficit to earn a satisfying opening day victory against Derry in MacCumhaill Park in the Allianz league.

It was a game of two halves with Derry on top in the opening half, but Donegal dominated proceedings particularly in the middle sector during the second half.

Derry looked fitter and were able to hold on to possession and that was best reflected with their fourth point in the 14th minute; they held possession for a total of 90 seconds before Benny Heron hit a great score with the outside of his boot. It put them in front 0-4 to 0-3 and from there to the half-time whistle they completely dominated.

Mark Lynch was outstanding from placed balls, hitting four in the opening half, two from outside the ‘45’ and he added another from play. He was the most influential of the four midfielders early on but tired as the game went on.

Donegal had actually started brightly and led by 0-3 to 0-1 after eight minutes with Patrick McBrearty lively and Christy Toye and Martin O’Reilly also finding the range.

Yet with Lynch punishing any frees given away, and with a grip of possession and having bossed a number of the key duels, Derry pushed clear and it was 0-9 to 0-5 at half-time.

The second half, however, was a different story. Martin McElhinney came in at midfield and made an immediate impact, pointing after only 46 seconds as Donegal found an extra gear and exploited talisman Michael Murphy on the edge of the square with long balls.

Within eight minutes of the resumption Donegal were a point ahead and even though Derry briefly got back on terms, Donegal had by then wrestled control of the game.

They could afford to see a contentious penalty, won and taken by Murphy, come back off the crossbar before Odhran MacNiallais finished a great goal to put them on their way.

From there to the finish they were completely on top as Derry ran out of steam. Christy Toye and Neil Gallagher were immense around the middle and young Martin O’Reilly and Patrick McBrearty hit some great scores.

1 Born to ride, born to win: Sam Bennett, the making of a green machine
2 Two in custody in Tour de France doping investigation
3 Gabriel Jesus gets Man City over the line against Wolves
4 Taking a knee has become a PR stunt, says Les Ferdinand
5 Inside the world’s largest sports air dome just outside Knock
Real news has value SUBSCRIBE