Division Four: Antrim and Louth give nothing away ahead of league final 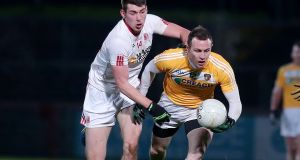 Bragging rights was the only thing at stake as Antrim and Louth completed their Division Four campaigns at Corrigan Park in Belfast, with both teams already promoted.

A drab, lacklustre 70-odd minutes ended in deadlock with Tomás McCann tossing over a close-in free-kick on 72 minutes to snatch a draw for Antrim. It was just about what the match deserved as the standard of football was below par, even for the basement division.

Both teams showed a lot of action during a free-ridden affair but there was nothing to warm the hearts of either set of fans.

The teams were level four times during the first half and went in 0-5 apiece at the break. It was level six minutes into the second half, as well, before Antrim pulled away to led 0-11 to 0- 6 after 55 minutes.

Louth awoke again to snatch three quick points and right on the 71st minute mark Ger McSorley fired in a goal for the visitors to grab the lead at 1-9 to 0-11. However, McCann levelled the argument and the teams will meet again in the play-off final.

In a game that only determined group placings, Wexford cruised to a comfortable 11 point victory over Carlow in their final Division 4 clash at Innovate Wexford Park on Sunday afternoon.

With both sides already confined to the lower reaches of football for another league campaign, the game itself just about raised above the mediocre, as the sides struggled to bring any real competitive edge to their play.

By the 15th minute Wexford had edged into a 0-5 to 0-3 lead, as Eoghan Nolan, Donal Shanley and Ciaran Lyng were on target, while it was Paul Broderick (2) and Brendan Murphy that kept Carlow in touch.

As Daithi Waters began to control midfield it was clubmate Ciaran Lyng who showed neat footwork in front of goal before firing low to the net, while six minutes later a fine run and finish for a splendid goal from Sean Gannon hualed the visitors back into contention, but it was Wexford who still led 1-8 to 1-5 at the interval.

Once Wexford added two quick points through sub Tiernan Rossiter and Michael Furlong they went on to assume total control, building up a lead of 1-12 to 1-6. As Carlow began to struggle Wexford played some of their best football with subtitute Sean Ryan finding the net 10 minutes from the end sending his side into a 2-12 to 1-6 lead.

Carlow, to their credit, kept on battling resulting in a fine Paul Broderick goal seven minutes from the end, but it was Wexford who finished with five unanswered points to end their campaign on a winning note as they now head into a championship opener with Kildare.

Wicklow withstood a London fightback at Ruislip to snap a four-game losing streak.

Dean Moore’s goal on the stroke of half-time and a flurry of points after the restart looked to have put the Garden County on course for a comfortable victory, but they were held scoreless for the final 27 minutes as London rallied.

The Exiles cut the deficit to three points late on but Wicklow held on to claim their first victory since February 7th.

Liam Gavaghan cancelled out Mikey O’Connor’s early goal and the sides could not be separated until Moore struck in the final minute of the first half.

Four unanswered points at the start of the second period put Wicklow in control, but the introduction of Lorcan Mulvey sparked London into life as they set up a nervy finish.