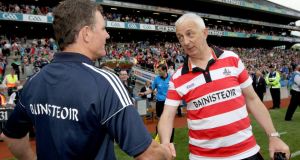 A handshake under the Cusack Stand. “You coming racing?” asks Alan Mulholland. “No,” Counihan replies, “but I’ll be giving you a ring to get one good one for me.”

Galway have race week, Cork have championship. That’s the way it has been for many a year but the Tribesmen were agonisingly close to disrupting the status quo on Saturday night.

A pack of All-Ireland winners refused to let that happen.

“Galway looked very strong and we looked very vulnerable but over the 70 minutes I felt we didn’t get too many breaks in terms of goal-scoring chances,” said Counihan. “The Galway keeper did exceptionally well . . . ...I think we had six or seven of those.

“They are on the go a good few years and they just don’t give up,” he said of his team. “That’s something that’s hard to buy.”

Burning desire
“There’s a burning desire in the dressing-room to build from this,” Mulholland said. The Galway manager wouldn’t confirm or deny if he would be a part of that process.

“Ah yeah, I thought we had it. 62 minutes and three points up. If we had held them without a goal. We were looking to add a point to go four up. Mike Farragher took a shot into the keeper’s hands and they came up the pitch and got the goal; that was a critical play. If we’d kicked that over the bar that might have seen us through.”

“When you have a group of All Stars to take off the bench like Paddy Kelly and Donnacha O’Connor and Paul Kerrigan it helps. We always knew that they were going to come at us and our guys put in a lot of effort during the game. You could see it on their faces. They were beginning to wane so we just wanted to hold that two-, three -point cushion to the end but the goal was the killer.

“I don’t think it was us stopping playing. I’d like to give credit to Cork to be able to push on at the end, they are a very good side.”

Galway have, at least, made a significant leap from the awful 17-point beating inflicted by Mayo in May.

“A unity has come into the group, perversely or ironically, since Mayo that hasn’t been there. If we had gone further we would have been saying that Mayo was the making of this team. It still could be.”

1 Ireland v Scotland: Doris’ day as Caelan set for first cap
2 Six Nations: Pundits, journalists and players have their say
3 Men in Black: The referees for Ireland’s Six Nations games
4 Ashleigh Barty now living up to all her earlier promise
5 Gary Lineker: ‘60 is just a number, 70 is the one to worry about’
Real news has value SUBSCRIBE

Rory McIlroy pleased with first start as he eases into 2020 05:00
Men in Black: The referees for Ireland’s Six Nations games 05:00
Racecourse betting ring rallies in 2019 with increase in turnover 01:00
Niall Quinn and Gary Owens reassure FAI staff about future 01:00
Sizing John set for return to fences in Irish Gold Cup 01:00
Crossword Get access to over 6,000 interactive crosswords