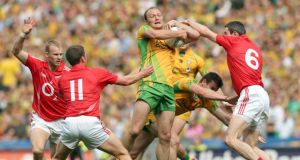 Donegal’s Colm McFadden holds off Cork defenders during the All-Ireland semi-final in 2012. The meetings between the sides have been important staging posts in their respective fortunes over the last six years. Photograph: Donall Farmer/INPHO

It is easy to forget, now that Dublin seem to be All-Ireland favourites for always and evermore, that not too long ago Cork were regarded as the smart choice to boss the national football scene.

Thoughts of those days may cross the minds of the senior players on the long drive to Ballyshannon this weekend for what is an intriguing Division One match against Donegal. The fates of Donegal and Cork have intersected at key moments over the past six years and echoes of those encounters can still be heard this year, even as they attempt to establish new identities.

When the sides met in the 2006 All-Ireland quarter-final, they were both attempting to establish themselves as national contenders during a period dominated by Kerry, Tyrone and Armagh.

Although Cork won that afternoon by 1-11 to 1-10, it is often forgotten the Ulster men had looked the choice team in the first half, whipping up 1-4 after a Christy Toye goal and holding Cork to 1-1 after 25 minutes – and the goal came from a penalty. The match was there for both teams until deep into injury time: Cork shaded it in composure. Donegal would win the national league title a year later but when the sides next met in championship, in 2009, Cork had developed another dimension.

The Cork players seemed to be able to score at will – and they were working at half-pace by the final quarter. Still, it is worth remembering just how feared Cork were at that time.

“I think Cork are made for Croke Park: the size of the field suits their natural advantage in height and strength,” John Joe Doherty, Donegal’s manager that afternoon, told The Irish Times a month later. “Their pace was hectic and we couldn’t match it. And we were criticised for the way we lined out, bringing men back from the half forward line.

“But that is how we set ourselves up when we had beaten Derry and Galway. We felt we had no other option with the way Cork were going through teams. It looked like they were going to destroy Tyrone before they had a man sent off.”

It was a fair point. Donegal came into that match heartened by four successive qualifying victories: if the wins against Carlow and Clare didn’t do much to set pulses racing, then they could point to a gripping extra-time defeat of Derry and then a 0-14 to 0-13 win against Galway in Sligo.

Red shirts came in waves that afternoon; huge men running with the ball and eating up the ground in Croke Park with startling rapidity. They had finishers everywhere. Best of all, they had a substitutes bench full of de facto starters. Donegal hadn’t won a championship match in Croke Park since they beat Meath in a fourth-round qualifier in 2002. Cork were, by this stage, habitual quarter-finalists. If the Ulster men had doubts it was understandable.

“It was very easy to show up at 4.30pm for a match in Ballybofey,” Doherty remarked. “Playing in Dublin added a new dimension to the thing and the way Cork started against us left us struggling to keep up with them. Then, once we fell behind, Croke Park can be a very unforgiving place.”

But it wasn’t simply a case of Cork catching fire that weekend. In the semi-final, they sent All-Ireland champions Tyrone packing despite having Alan O’Connor sent off. They held Tyrone to just four second-half points playing with 14 men.

If their year ended in a bitter Munster joke – Kerry recovered from the heavy Munster semi-final beating and took advantage of the fact Cork had erased Tyrone, by beating them in that year’s final – there was no escaping Cork’s potency. When they won the All-Ireland in 2010, the expectation was that the championship would liberate them and that more would surely follow.

As Cork celebrated that winter, the players must have all but forgotten about their one-sided encounter with Donegal a year earlier. Everyone had – except the Donegal players involved. It became a focal point when the teams met again in August 2012.

Donegal were two-time Ulster champions and had enjoyed a gripping win over Kerry in their first championship meeting. But Cork were regarded as the true litmus test of the potential for Donegal’s new order to go on and win an All-Ireland title.

Eight Donegal men had started in that 2009 drubbing. The 0-16 to 1-11 turnaround that Donegal manufactured was the best game of that year’s championship and was a complete realisation of the McGuinness project, with disciplined defence allied to slick, purposeful counter-attacking.

“It probably was,” Rory Gallagher, the new Donegal manager who was a selector with McGuinness from 2011-2013, told Joe Seward in a radio interview this week.

“The first half was an incredible game and we were a wee bit fortunate to go in a point ahead. We were a bit concerned Cork were getting in so easily. But in the second half we probably produced our best display of that year. And there is a good rivalry there now and not much between them when it comes to battle.”

The nature of the performance left Donegal favourites to win the All-Ireland. But it left question marks over Cork. The closeness of the contest confirmed they were among the elite teams in the country but the national expectation they would dominate wasn’t materialising.

“I said to our lads when we came off the field that day: did we really feel that we emptied the tanks. I am not sure that we did,” Conor Counihan would recall prior to the 2013 season.

Counihan stepped down after Cork’s quarter-final loss to Dublin in 2013. Donegal’s All-Ireland-title defence went up in flames: blunted with injuries, the Ulster men were a hollowed out version of themselves. Obituaries were written for both teams. Counihan’s six-year reign had been one of tremendous consistency but the notion Cork should have won more hung over them. The verdict on Donegal was equally final: the severity of the McGuinness regime had left them spent.

When Donegal left Croke Park that afternoon in 2009, Rory Kavanagh tried to articulate what it was like to meet Cork in such ravaging form and what Donegal had to try and do. “We were totally outplayed. It was a wee bit demoralising at half-time. We kept going, we showed a wee bit of spirit but we were totally outplayed. I was just telling the boys inside there if we can become a bit more consistent. We have to get back to Croke Park on a regular basis and we will be better for it.”

So it proved. Both counties would continue to show up in Croke Park in the seasons ahead. Sunday’s league match brings them together when they seem to be on the same wavelength: trying to establish a new identity, just outside the realm of favourites but genuine contenders. That will suit them fine for now.