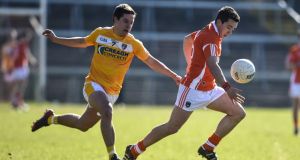 Armagh advanced to the semi-finals of the Ulster Under-21 Football Championship with a comfortable victory over Antrim in the Athletic Grounds yesterday.

The home side did all the damage in the first half with Ryan McShane’s goal after 27 minutes helping them into a 1-10 to 0-3 lead at half time.

Niall Grimley palmed home a second goal immediately after the restart while Antrim captain Dermot McAleese scored a fine goal in the 46th minute with the game long over as a contest.

Floodlight failure had caused this rearranged quarter-final tie to be postponed last Wednesday night and Antrim were quickly into their stride yesterday, leading briefly in the early stages by two points to one after six minutes.

However Armagh’s senior county midfield pairing of Ethan Rafferty and Ciaran O’Hanlon were impressive and took control, using a strong first-half wind to their advantage.

Armagh hit an unanswered seven points in a 12 minute spell to take a commanding lead, Ryan McShane with two points before bagging a goal before the interval.

Having built up such a big lead, Grimley’s goal after the restart putting them 13 points clear, Armagh took their foot off the pedal and faded in a poor second half.

They will play Tyrone in the Ulster semi-final on 1 April with Donegal taking on Monaghan in the other last four tie.