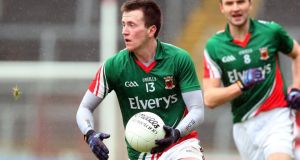 Mayo’s Cillian O’Connor make his first start of the year as his side face Monaghan at MacHale Park. Photograph: Donall Farmer/Inpho

Tyrone v Derry, Healy Park, 7.0, Live Setanta Ireland
It’s been going from bad to worse for Derry and manager Brian McIver has had to make changes on an industrial scale to cover for injuries, suspension and sundry unavailability. The match ban for Mark Lynch removes a vital component of the team and they’re going to have to scramble hard to get anything here. On the other hand it’s gone from bad to better for Tyrone, who in what looked like a paradigm shift in Castlebar, decided to go defensive with a capital D to an extent that perplexed even a well-seasoned team such as Mayo. Even against more liberal set-ups Derry have been ponderous in the build-up and it’s hard to see how they can summon enough penetration and scores to get anything here.
Verdict: Tyrone

Cavan v Down, Breffni Park, 7.0; Live, Setanta Sports 1
Early days but Cavan look to be getting into some sort of groove. Outside of the Division Three final last year, they haven’t lost a regular league game in close to two years. In their first visit to Division Two since 2008, they already have more points on the board after two games than they managed altogether last time out . And all without David Givney, Cian Mackey and Eugene Keating. They can extend that sequence here against a Down side who manager Jim McCorry concedes hasn’t really got going yet.
Verdict: Cavan

Division Four
London v Longford, Ruislip, 2.0
If Longford are better than this level, they haven’t exactly been flaunting it. Mickey Quinn is back to man the centre for them and with Brian Kavanagh, Sean McCormack and Francis McGee all available, Jack Sheedy’s side are nearing full strength. It will surely be enough against London, whose traditional spring troubles show no sign of easing.
Verdict: Longford

Waterford v Carlow, Fraher Field, 7.0
The first bit of halt to Waterford’s 2015 gallop came against Offaly last time out and they could find it tricky against a Carlow side that is unbeaten and on a relative high. Brendan Murphy’s returns could tip the balance.
Verdict: Carlow

SUNDAY
Matches at 2.0 unless stated
Division One
Kerry v Dublin, Fitzgerald Stadium, Live TG4
Strange that one of the most box-office of league fixtures should for the second time in three seasons go head to head with an Ireland-England Six Nations rugby match but there’ll still be plenty of interest here. Although Eamonn Fitzmaurice’s team have been slow starters this season, it’s impossible to believe that they won’t be particularly roused for this contest. Anthony Maher returns to a centrefield that has been doing well with David Moran in charge and at full forward Kieran Donaghy is back after an excellent club campaign. Dublin showed resilience and composure in taking the points off a strong Donegal last week but there’s a strong feeling here that Kerry might may want to make a point in this fixture given their recent poor return against the Dubs, just one win in the last seven meetings.
Verdict: Kerry

Donegal v Cork, Ballyshannon, deferred TG4
Cork have had a great start to the league but could easily be zero from two instead of top of the league. The win in Castleblayney was a model of economy, taking their chances while their opponents didn’t. The finishing of Colm O’Neill was exceptional and the team played well in executing a more cautious game plan. Donegal can’t have been thrilled with blowing so many chances against Dublin but they’re likely to respond to the disappointment with an improved performance – one that should give them both points.
Verdict: Donegal

Mayo v Monaghan, MacHale Park
Mayo ended up bamboozled by the severity of Tyrone’s defensive game but they didn’t play well themselves either. They make changes and Cillian O’Connor makes his first league start, as does Tom Cunniffe. Malachy O’Rourke was frustrated at not getting anything against Cork as they had abundant chances and this is a difficult match to follow with, against a team that will have given a good deal of thought in the past couple of weeks to how to cope with a defensive system. Mayo to respond with a win.
Verdict: Mayo.

Division Two
Roscommon v Meath, Dr Hyde Park, 1.0
You know things are going reasonably well for Roscommon when John Evans’s main concern seems to be to dampen down the hype. He was out again this week reiterating his conviction that the Rossies don’t have the pool of players to survive in Division One should their fine early-season form carry them to promotion. They could be vulnerable here, with the excellent Enda Smith, Donie Smith and Conor Daly all sure to be feeling the effects of Sigerson exertions. Meath righted the ship somewhat against Kildare and have Damien Carroll back in harness.
Verdict: Meath

Kildare v Westmeath, Newbridge
You wouldn’t say the spring is a disaster just yet for Kildare but they can’t afford for this to go on much longer either. Losing their two opening games is bad enough but losing them after leading comfortably well into the second half both times is killer stuff. The cavalry have arrived for this one – Jason Ryan can call on Daniel Flynn, Alan Smith, Mikey Conway and Emmet Bolton. They should have too much against a Westmeath side for whom a goalkeeping crisis has brought Gary Connaughton out of retirement for his first game since June 2013.
Verdict: Kildare

Galway v Laois, Tuam Stadium
Laois need to arrest the slide soon but the vibes, to put it mildly, are not great. “We have five more games left,” said Tomás Ó Flatharta after losing at home to Cavan three weeks ago, “and you’d be looking down the road asking where are we going to get wins there?” Their problems are no mystery – they’ve kicked just 18 scores in two games. Only Wexford and London have kicked fewer. Although they have Brendan Quigley back after suspension here, they face a Galway side that are the joint top-scorers in the country.
Verdict: Galway

Division Three
Limerick v Armagh, Kilmallock
Armagh’s juggernaut charge back to Division Two heads for Limerick where it’s unlikely to hit a speed bump. The home side is suffering for the absence of their best players, particularly in attack, which contributed to being mauled by Tipperary in which they managed three scores. Making bad worse, Jamie Clarke is set to return for Kieran McGeeney’s men, enhancing their firepower up front.
Verdict: Armagh

Louth v Wexford, Drogheda
Louth pulled off a good win over Clare in their second outing whereas Wexford got hammered by Armagh. There’s probably better in Wexford than they’ve shown so far but David Power has his work cut out trying to develop and trial players while at the same time making sure they don’t get relegated. They should put in a better display but mightn’t win.
Verdict: Louth

Fermanagh v Tipperary, Brewster Park
The two main contenders for accompanying Armagh out of the division. Tipp however didn’t blink when playing in Armagh and have Robbie Kiely back from suspension. Peter McGrath’s side have started well and Seán Quigley picked up a Player of the Month gong for January but the visitors look more likely.
Verdict: Tipperary

Clare v Sligo, Cusack Park
Clare seized up in losing to Louth, fading badly in the second half and appearing to let concentration slip but how they respond will be instructive. With home advantage and opponents who have been struggling to find form so far, Colm Collins’s team can get back on track.
Verdict: Clare

Division Four
Wicklow v Offaly, Aughrim
A serious test of league leaders Offaly this, against a Wicklow side whose league would have been over had they not overturned a nine-point deficit against Leitrim three weeks ago. With Niall McNamee back from the start, they can kick clear with a win.
Verdict: Offaly

Leitrim v Antrim, Carrick-On-Shannon
For all the positive noises around new Leitrim manager Shane Ward, they’ve thrown away winning positions in both their games so far. Antrim have been equally disappointing and can’t afford another slip-up.
Verdict: Antrim

1 What next for green jersey hero Sam Bennett after toughest of Tours?
2 Suarez’ Italian language exam rigged according to prosecutors
3 LeBron James has become this generation’s Muhammad Ali
4 Why this weekend’s Champions Cup semi-finals are still worth watching
5 Gerry Thornley: Talk of Anglo-French hegemony is over the top
Real news has value SUBSCRIBE