GAA Statistics: 14 footballers just one card away from suspension - who are they?

Who are the most, and least, cynical team so far in the 2016 Senior Football Championship? 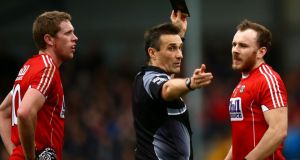 There are 14 players left in this year’s football championship who are one cynical foul away from a costly suspension.

Of those players, 12 feature in this weekend’s games, knowing that if they are to pick up another black card or a double yellow, they will miss an All-Ireland quarter-final or semi-final.

So far this year only two players have received a ban as a result of one of these combinations: Brendan Murphy missed Carlow’s qualifier defeat to Cavan, while Longford’s Diarmuid Masterson picked up his second double yellow (to go with his earlier black card in the league) in his team’s qualifier exit to Cork.

Murphy, Carlow’s talisman who had given the county his full commitment this year after heading to the US in recent summers, picked up a double yellow in his first league game and two black cards thereafter.

At the time he took to social media to vent his frustrations: “Missing tomorrow’s game now, very very frustrating!! Two yellows in first league game, two blacks for being awkward and clumsy, have to serve a one match ban. GAA would drive you mad #jokeshop.”

Clare and Kerry are currently in the most danger of losing a player under the same rules: they have three players who are just the one cynical foul away from suspension. Galway have two players, Tom Flynn and Damien Comer, while Cork, Donegal, Dublin, Mayo, Tipperary and Tyrone all have one player on the precipice. Westmeath have no player to worry about losing at this stage.

Galway have received five black cards in seven league games this year and three in three championship games. One of those, however, was issued to Comer in the Connacht final replay when it seemed he was being fouled. 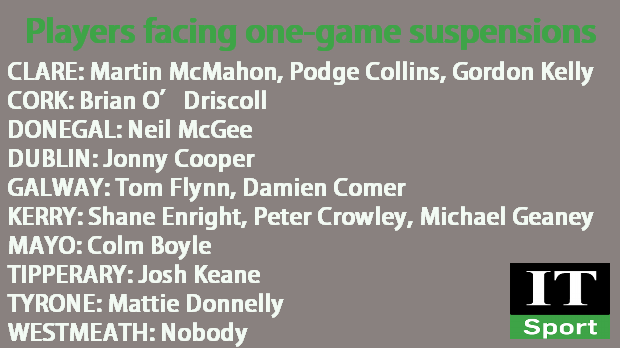 “I’d say I was probably one of the first players to get a black card while being in possession of the ball,” he said this week. “I tried to turn my man and as I tripped he fell down on top of me.”

Will the fear of receiving a third black card be playing heavily on his mind this weekend?

“Not really. You go out there and you give it your all on the day. Look, whatever happens happens, but obviously you don’t intentionally go out to get cards. I don’t know would I be totally in agreement with that rule, but it’s the rule that’s there and that’s what you have to kind of stick to.”

Comer is not the only key player on the edge. Clare have Podge Collins to worry about, while Donegal’s man on the list is Neil McGee. Dublin, who have yet to receive a black card in their three championship games, will have no doubt warned Jonny Cooper of his predicament.

The other players who will have to watch their step are the Kingdom’s Michael Geaney, Cork’s Brian O’Driscoll, Clare’s Martin McMahon and Gordon Kelly and Tipperary’s Josh Keane.

There have been 65 black cards dished out to the 10 counties still left chasing Sam Maguire.

That makes up 32 per cent of the 206 black cards issued so far in 2016. Within that, 69 came during the championship while 137 came during league games. That means that over the course of the 118 league games played this year, more than one black card was dished out per game. And likewise – actually a slightly higher average here – in the 54 championship games so far in 2016.

As for the offences: 40 per cent of black cards so far in 2016 have been for a “pull down”. Thirty per cent have been for a “trip”, 24 per cent for a “body collide”, five for provocative gestures, four for remonstrating with an official and one for rough play.

Of the remaining teams Donegal and Clare have been in receipt of the most black cards, with nine apiece. Galway and Kerry have eight, Tipperary seven and Dublin, Cork and Mayo have received just five.

And the question we all want answered: which team has been the most cynical so far in 2016? Well, Roscommon – with 10 – have the most black cards, and New York and Wexford have the least with one apiece. Yet games played obviously tell much of that story. New York played just the one game, while Roscommon have played more than any other team so far at 14.

So when you consider that, the team to have received the most black cards per game played, Wexford are still the least cynical. Just one black card for them in nine games, while the second best is Monaghan with just three in 11 games.

On the opposite end of the scale Longford (and New York) are top: they have 11 black cards in 11 games. Second worst are Sligo with nine in 10 games.

All of those teams are already out of the championship, of course. For those who remain though, they will have warned their players of the hidden cost of the black card rule.