America at Large: Praising the Lord is as fundamental to US sport as pom pom girls

NBA rivals often pray together, while victories are clear signs of benevolence from above 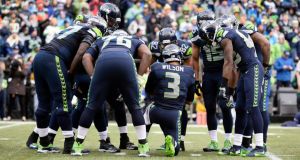 Quarterback Russell Wilson leads his Seattle Seahawks team-mates in prayer moments after providing a touchdown pass against Green Bay Packers in the second half of their NFC Championship Playoffs at CenturyLink Field in Seattle. Photograph: John G Mabanglo/EPA

Moments after unfurling a touchdown pass to Jermaine Kearse that punched the Seattle Seahawks’ ticket to the Super Bowl, quarterback Russell Wilson joined a bunch of his team-mates as they knelt in a prayer circle in the middle of CenturyLink field.

As the camera lingered on this impromptu congregation, tears mingled with the sweat on Wilson’s ecstatic face. Once the worshippers had finished giving thanks and praise, he was corralled by a television crew to whom, through sobs, he offered a very spiritual take on leading the Seahawks to a famous comeback victory over the Green Bay Packers.

Aside from prompting obvious questions about why any deity would take such a fervent interest in the NFL play-offs, and then favour one team’s believers over another’s, Wilson’s passionate invocation brought into renewed focus the often outsized role religion plays in American sport.

The touchdown celebrated by pointing skyward in acknowledgment of a higher power, the victory that isn’t really complete until franked by a breathless, on-camera explanation of the unseen part played by Jesus in the triumph.

“Can’t we silence these Christian athletes who thank Jesus whenever they win and never mention his name when they lose?” asked the late comedian George Carlin. “You never hear them say, ‘Jesus made me drop the ball’ or ‘The Lord tripped me up behind the line of scrimmage’. According to these guys, Jesus is undefeated.”

Whatever his win-loss record, Jesus’s presence is keenly felt in locker-rooms all over the country. After NFL matches, men from opposing teams, who’ve spent the previous three hours wreaking physical havoc on each other, routinely kneel together and pray with their helmets in hand.

This curious phenomenon began at the end of a bad-tempered clash between the San Francisco 49ers and the New York Giants a quarter of a century ago. As players from both sides brawled on the field, Christians on each squad prayed together on the 50-yard line, a symbolic gesture that had been organised in advance by the clubs’ respective chaplains.

From there, it soon became part of the post-game ritual at every level of the sport.

Indeed, when Jackson was let go last summer, stories abounded that religion may have played a role in his departure. Some at the club were reportedly unhappy at how he appeared distracted from his coaching duties by his desire to constantly return to his home church to preach. Jackson was a star point guard for the New York Knicks 14 years ago, back when their then coach Jeff Van Gundy complained the team’s Bible studies group was affecting players’ preparation for the tip-off.

Others have viewed these overt displays of devotion as counter-productive too. When Doc Rivers coached the Orlando Magic in the late 1990s, he noticed that one of his players, a Muslim named Tariq Abdul-Wahad, was very uncomfortable as his Christian team-mates recited a pre-game prayer aloud in the locker-room each night. Rivers replaced the rite with a minute of private reflection from that point on and Abdul-Wahad told him it was the first time anybody in the NBA had ever respected his religion.

A devout Muslim who took a year off his career to make the Hajj pilgrimage to Mecca, Abdullah was penalised by refs even though former Denver Broncos’ quarterback Tim Tebow, a devout Baptist, once trademarked the particular way he knelt and celebrated every score. Even if the league later admitted the on-field punishment was incorrect, the double-standard was disturbing, especially in a sport with no shortage of Islamic players. Ecumenism is less of an issue in the uniformly Christian NASCAR where a local padre is usually invited to lead spectators, drivers and crew in prayer just before the race begins. Indeed, a couple of years back, Pastor Joe Nelms took the mike prior to the start of an event in Nashville, Tennessee, and delivered a soliloquy that might have been lifted from Will Ferrell’s Talladega Nights: The Ballad of Ricky Bobby.

From his lips to God’s ears. Apparently.