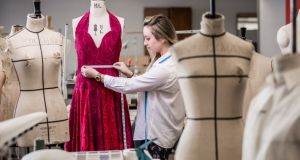 Northern Ireland has long punched above its weight in the worlds of drama, media, music and more, a record of success now reaching new heights with the global triumph of the Belfast-based fantasy TV epic Game of Thrones. But it’s never had an academic home dedicated to combining all those entertaining strengths into one interdisciplinary powerhouse.

Until now. Enter the Creative Industries Institute at Ulster University, a brand-new centre of innovation and research that seeks to connect our most imaginative young minds with today’s most visionary industries, some of them right on their Belfast doorstep.

Officially unveiled this month, the institute plans to coordinate, focus and amplify the creative energy that already flows at the university’s disparate campuses in Belfast, Coleraine, Jordanstown and Magee in Londonderry.

Prof Frank Lyons, a composer and music technologist who is a director of the new institute, says the university is determined to forge a stronger whole from all those wonderful parts.

“We’re tapping into the Zeitgeist around creative industries, now that there’s this growing realisation that creative industries aren’t just about entertainment. They massively contribute to the economy,” Lyons said. “Game of Thrones has thrown a real spotlight on that in Northern Ireland, and we’re going to build on that vibrancy with our biggest-ever expansion of skills and investment.”

Lyons says teachers and students in each discipline are already being facilitated to collaborate on projects, and the new institute will make such partnerships a core part of learning. The approach can mean, for example, budding actors and sound designers studying in Derry working with physiotherapists in Jordanstown. Or editors and broadcasters in Coleraine’s new £9 million multimedia newsroom working with virtual reality scientists or fashion designers in Belfast.

Thanks to Ulster University’s close alliance with key industries and employers, these multi-skills research teams can be deployed on work that fills specific emerging needs. This approach is giving companies obvious incentives to invest in Ulster University research and invention – and giving students involved in such work the inside track on landing future-proofed jobs.

The Creative Industries Institute is taking shape at the heart of Ulster University’s most exciting expansion in decades: its planned 75,000-square-meter, £300 million campus along York Street in Belfast, not far from its existing Arts College, is the oldest piece of the university with roots back to 1849. Today’s plan calls for 15,000 students and staff to relocate their courses and research within the next few years from Jordanstown in Belfast’s northern suburbs.

That’s the backdrop for the Creative Industries Institute’s own ambitions. University leaders have agreed to give the institute £5 million in extra funding to expand its teaching and research posts and to ring-fence funding for hiring 12 doctoral researchers annually in creative disciplines.

Anthony Lilley, a British government adviser on promoting industrial innovation, has just been appointed Ulster University’s first professor of creative industries and will work alongside Lyons in driving the agenda. And Moya Doherty, creator of the global dance sensation Riverdance, will lead the institute’s advisory panel.

Lyons’ own work and teaching illustrates how the Creative Industries Institute’s cross-discipline approach can transform lives. Over the past 15 years, Lyons has dived deep into the modern technology of music composition, becoming as much of a sound technology expert as a musician and composer. He’s using that cutting-edge insight to open doors for others through his “Inclusive Creativity” campaign.

Brainstorming with software experts and health specialists, Lyons’ team has pioneered the development of laptop-based electronic instruments that allow a Derry-based quintet of disabled musicians, Acoustronic, to perform his and their own compositions in live concerts. These newly empowered musicians have just performed Lyons’ latest work, “NonZeroSum,” in Derry and London alongside the Benyounes String Quartet.

Lyons sees his expertise in sound manipulation – using computers’ ever-expanding processing power to create aural oddities and delights never heard before – as another example of a creative activity that is experiencing ever-increasing demand as part of multiple degree programs.

“Music composition and sound design are important in our core disciplines in Magee: music, drama and the cinematic arts,” Lyons said. “But we’re finding there’s a real need for audio expertise across a lot of the media and art courses in Belfast and Coleraine, too.”

“Broadcasters and online media need a lot of expertise in sound design and sound creation for interactives,” Lyons said. “And it’s even more strongly in demand for what we’re developing at Ulster, because video game design has a huge emphasis on immersive sound design.”

“This is really what the Creative Industries Institute is all about,’’ he said, “connecting all these creative skills and disciplines together using the new technology and new tools of the 21st century.”