Electric vehicles: there’s never been a better time to buy

Grants, great model choice and VRT reduction of up to €5,000 makes an electric vehicle purchase a great decision

On the road with electric vehicles. Taxi driver, Peter Hanley 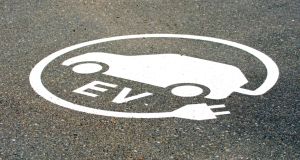 The increased driving range of pure electric vehicles combined with the availability of fast charge points on all major routes means that it should no longer be an issue even for longer trips. Photograph: Getty Images

With almost 20 different models to choose from ranging from the BMW i3 to the Renault Zoe Intense, ongoing technology improvements and a generous grants and tax regime there has probably never been a better time for Irish motorists to invest in an electric vehicle (EV).

An EV can reduce energy costs by 74 per cent compared to a comparable diesel engine car, even more for petrol models, enjoys the lowest rate of motor tax in Ireland at €120 per annum and attracts a grant of up to €5,000 from the Sustainable Energy Authority of Ireland (SEAI).

Add to that the Vehicle Registration Tax (VRT) reduction of up to €5,000 and the proposition becomes very compelling.

“People don’t realise the opportunity that EV driving represents,” says Declan Meally, Head of Emerging Sectors with SEAI. “The technology and the cars have moved on and I am getting a feeling that we are reaching a tipping point in relation to the widespread acceptance of electric vehicles.”

It is very hard to argue with the fuel savings involved but the attraction goes beyond that. Maintenance and servicing costs too are much lower. “There is no engine oil required, tyre wear is lower, and the motor tax is the lowest you can get.”

The tyre wear savings are mainly the result of reduced vibration in comparison to internal combustion engine cars, but other factors are at play as well. “ We have found that drivers actually change their behaviour as a result of driving the cars. The much smoother drive leads to greatly reduced wear and tear,” says Meally.

Smart drivers can also save even more on fuel costs by using public charging points. Meally says, “charging is free at any one of the 1,500 ESB charging points around the country. I spoke to a taxi driver recently and he told me that he has reduced his fuel costs to practically zero since switching over to an electric vehicle. He drives 54,000 kilometres a year and the saving to him is enormous.”

The environmental benefits are also considerable. An EV can drive with zero emissions improving our air quality while making our lives quieter. The CO2 produced by an EV charging up with electricity is up to 40 per cent less than the CO2 produced by a comparable diesel engine car.  Furthermore, as the electricity system reduces its CO2 content each year as a result of increased generation from renewable sources, so too will the CO2 associated with an EV. Indeed, almost 23 per cent of the electricity supplied to an EV is already generated from renewable sources.

With all of these benefits it is hard to believe that less than 2,000 EVs have been purchased from dealers in Ireland so far. Other factors are acting as barriers to purchasing decisions and chief among these is so-called range anxiety – the fear that your car battery will run out of energy in the middle of the road somewhere far distant from the nearest charging point.

Meally believes these fears are unfounded. “EVs are perfect for 90 per cent of all journeys made by motorists in Ireland,” he argues. “People ask about the challenges of doing longer trips but how often do they actually drive from Dublin to Cork or Limerick to Dublin. The vast majority of trips taken in this country are over short distances. If you are commuting to and from work or driving to the shops, range anxiety should not be an issue.”

The increased driving range of pure electric vehicles combined with the availability of fast charge points on all major routes means that it should no longer be an issue even for longer trips. For example, the 30kWh Nissan Leaf has a range of 250 kilometres and the new 28kWh Hyundai Ioniq has a range of 280km on a single charge (based on the official drive cycle figures which represent combined city and motorway usage).  In real world conditions and at motorway representative speeds, this would provide sufficient range to readily complete the journey from Galway to Dublin with a single 20 minute stop to charge. “There is a phone app which allows you to locate your nearest fast charger along the way or public charging point and with 1,500 available you are sure to never to be far from one wherever you are in the country” says Meally.

In fact, Meally believes EVs are particularly suited to Ireland for a number of reasons. “They are very well suited to an island this size and with ranges increasing all the time, driving range will no longer be an issue. Also, with the amount of electricity we generate from renewables like wind increasing all the time in this country the environmental benefit is growing as well.”

The other issue preventing many motorists from making the switch to an electric vehicle is the perception that they are more expensive than their petrol or diesel counterparts. There is some truth in this but the issue has been dealt with by a combination of the grant and VRT reduction.

“The grant and the VRT relief are worth up to €10,000 combined,” says Meally. “The dealer applies for the grant on the consumer’s behalf and it is taken off the price of the car before they pay for it. It is really very straightforward. This brings the price down to the same level as the equivalent diesel model.

This combination of competitive prices, vastly reduced running costs, environmental soundness and improving technology has the potential to bring about a fundamental change to Ireland’s car market. “Up until now Tesla has focused mainly on high-end vehicles offering a range of 600km in the €100,000 price range but has now come out with a car for €30,000 to €40,000 with a range of 400 kilometres or more. Renault have announced a new version of the Zoe which will deliver 400km range and General Motors will be delivering a new car called the Bolt which will have a range in excess of 400km next year. Volkswagen is working on a vehicle that will cost less than that and will have a range of 500 kilometres. This should be on the market by 2019. These really are game changing technologies and I believe we are now at a tipping point in the market. With the financing deals being offered now people can pay for an EV for less than it costs them to pay for the fuel for their old car.”

For more information about electric vehicles and the grant available visit www.seai.ie/evgrants