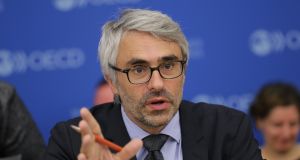 Pascal Saint-Amans: director of the OECD

The Global Tax Policy Conference has a stellar line up of speakers, including what might be described as the world tax triumvirate: OECD’s Pascal Saint-Amans, the European Commission’s Valère Moutarlier and Bob Stack of the US treasury, who will kick off the conference with an update on the major tax changes around the world.

Pascal Saint-Amans is director of the Centre for Tax Policy and Administration at the OECD. He has played a key role in driving the OECD tax transparency agenda in the context of the G20.

Before joining the OECD, Saint-Amans was at the French ministry for finance for nearly a decade.

Valère Moutarlier has been director in charge of direct taxation, tax co-ordination, economic analysis and evaluation in the DG for Taxation and Customs Union of the European Commission since 2014. Before that he spent five years in the private office of the Commissioner in Tax Policy, as adviser to tax commissioner Algirdas Šemeta.

Bob Stack is the deputy assistant secretary for international tax affairs in the office of tax policy at the US department of the treasury.

He is responsible for the conduct of legal and economic aspects of tax policy in bilateral and multilateral relations with other countries, as well as advising the legal and economic staffs within the office of tax policy, other offices of the treasury department and other government agencies on policy analysis for domestic legislation and administrative guidance in all matters involving cross-border taxation.

US thinking on corporate tax is critical and some leading US tax figures will give their views. Dave Camp is senior policy adviser within PwC’s Washington National Tax Services (WNTS) practice and brings professional and political experience.

He provides his perspective to PwC clients on federal policy issues, including tax reform, the economy and the impact of proposed policy changes on businesses. He served in the US House of Representatives from 1991 to 2015, and from 2010 to 2014 he was chairman of the powerful House ways and means committee, which is responsible for US tax policy.

Ronald Dickel brings an industry perspective as vice president of finance and director of global tax and trade at Intel Corporation, where he is responsible for tax, export licensing and customs planning and compliance. Before Intel he was vice president of tax at Alcoa in Pittsburgh and executive director of international tax for Sara Lee Corporation. He was an adjunct professor at the John Marshall Law School in Chicago, where he taught taxation of foreign income in the master’s of law.

Dickel chairs the R&D Tax Credit Coalition and is a director of the Tax Council.

Nick Giordano also adds public service and private sector perspectives to US tax policy topic. He is tax policy leader for EY in the US and co-ordinates the practices and resources in US tax policy work, including Washington Council EY, the Quantitative Economics and Statistics group and the EY Center for Tax Policy.

John Connors brings Vodafone’s perspective to the session on what transparency and country-by-country reporting mean to countries and companies. Connors is group tax director with Vodafone and is responsible for all aspects of Vodafone’s global tax affairs, including its overarching tax strategy, structuring, planning and reporting and managing tax risk and issues across the group. He also instigated the groundbreaking publication of Vodafone’s total tax and economic contribution, which is disclosed on a country-by- country basis.

Connors has worked in the public sector, as a tax inspector with the UK Revenue and Customs, tax policy adviser at the British treasury and three years at DG Taxud at the European Commission.

BEPs changes will have a huge impact on the transfer pricing policies of multinationals and Catherine Harlow of RELX and Sean Foley of KPMG global transfer pricing services in the US will bring insights on the new approaches for this leading issue.

Catherine Harlow has nearly 20 years’ experience advising on transfer pricing both in practice and industry. She has been head of transfer pricing at the RELX Group for eight years, managing a multinational team and advises business divisions worldwide on how to manage, plan and defend their transfer pricing.

Before joining KPMG, he managed the IRS advance pricing agreement (APA) programme, an alternative dispute-resolution procedure for international transfer pricing issues under IRC section 482. He is a past chair of the American Bar Association Transfer Pricing Committee.

Also contributing to that session will be Edward Troup, second permanent secretary and tax assurance commissioner at the British Revenue and Customs. Having become involved in tax policy through the Institute for Fiscal Studies and other academic and professional groups, he was asked to join the treasury as special adviser on tax to Kenneth Clarke in 1995.

He joined as director, business and indirect tax in 2004 and was director-general, tax and welfare from 2010 until he joined Revenue in 2012.