Role of finance director central to business according to awards nominees

Two business leaders, fulfilling key director level roles in large businesses, discuss working industry instead of practice, the importance of a team approach and future developments in the role 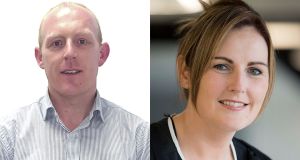 DJ Corbett, ACA, finance director at TV3 Ireland and Grace Winters, ACCA, EMEA shared service director at Abbott are both finalists in the Finance Director of the Year award at the 2018 Irish Accountancy Awards.

The third annual Irish Accountancy Awards will take place on Thursday, April 26th, and the nominees for Finance Director of the Year have hailed the part their teams have played in their securing a nomination.

Grace Winters, ACCA, is the EMEA shared service director at Abbott. She first completed a diploma in Business Management and IT at Griffith College before continuing to a career in industry. “Without the right team in place you won’t achieve your goals. You put the right people in front of things and you’ll succeed, no question”.

DJ Corbett, ACA, is finance director at TV3 Ireland. He first completed a Bachelor of Commerce in UCC, before joining PWC in Dublin and then progressing to a career in industry. “It’s crucial. I’ve always said without a good team, you aren’t anything as a leader. It is no different here. We have a relatively small team: there are five people under me who look after all aspects of TV3’s finance. There is great comfort in delegating something and knowing it will be done well and done accurately. The other great thing is to see people develop. When I started here there wasn’t much crossover in terms of tasks, but now they can seamlessly cover for each other and they are rewarded as they are developing their career”.

Their experience chimes with that of last year’s winner, Shane McGibney. “While personally it wasa great honour to receive this award, I looked upon it as a combined effort with all my colleagues in Kerry Finance. It was great that my team, and especially those with CIMA qualifications, got recognition for the important role they play in our business”.

Both Winters and Corbett have eschewed building their own practice in favour of working in industry, with Winters attracted to the challenge. “I really enjoy working with people, more so than just numbers and figures. I like the leadership side of the role. I find it is more challenging. It keeps you energised: you have to adapt from one thing to the next very quickly. I find in practice it is very much routine-based, but in industry it is more varied”.

Among those challenges is the fact that the role has changed over the last 10 years in the face of technological advancements. “Drastically”, is how Winters describes the scale of change.

Corbett explains that the biggest change he has noticed in recent years is the increased emphasis on the finance director playing a strategic role. “From my own experience when I started, the finance director role had more of a reporting-type function, whereas now it has become a lot more strategic. Being able to tell someone what the numbers are is one thing; being able to analyse what that’s telling you to look at is another. For example, we noticed a trend that the linear ad sales have been dropping with competition from Facebook and Google. We said that we need to do something to counteract this, so we have entered a contract with Sky to do addressable advertising in Ireland and the UK. This aspect of the business is what gives the job a more strategic edge”.

Both nominees agree that, in spite of increased automation, the importance of the finance director’s role is not going to diminish.

“Most companies are driven by the bottom line, and to be able to reliably report and forecast what that is in terms of revenues and cost is essential. When driving businesses forward, the finance director has an important role in that, in terms of having a more rounded business knowledge that maybe some other respective areas of a company may not have,” says Corbett.

Our programme director, for example, would be very much focused on content and maybe not necessarily interested in what advertising is going on in the background, and likewise the commercial director will be interested in what is being broadcast and how that is going to rate. The finance director can give a wider, rounded picture and can really contribute to strategic decision-making. I can’t see that changing in the short term”.

Winters agrees that the role, while changing, is assured in the future. Being sufficiently skilled to navigate that ever-changing environment is their advice to young accountants who are eager to work in industry. “Embrace the profession. I think you have to be very agile: you have to able to manoeuvre from one discipline to another in order to keep up with the changing surroundings that we work with”.

The winners of the Irish Accountancy Awards 2018 will be revealed on Thursday, April 26th. Visit the website for more information and to book your ticket.