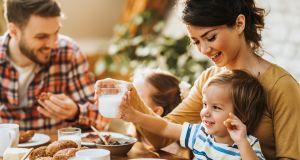 Maintaining a balanced diet and incorporating dietary sources of vitamin D including fortified foods and drinks is a simple, reliable way to ensure adequate levels of vitamin D and calcium in your family’s diet. Photograph: Getty Images

“It’s not until you’re older that you see the long-term repercussions of a diet with inadequate levels of vitamin D.” That’s according to Helena Scully, bone research fellow at the Mercer Institute for Successful Ageing at St James’ Hospital.

Right now, we’re spending more time than usual indoors. We need our sunshine, and not just as the backdrop to a barbecue or socially distant day at the beach – although that would be great. We need the sun to help our bodies produce vitamin D, an essential nutrient that, truth be told, we’re lacking significantly in Ireland.

“From October to March, we get very limited sun in Ireland and therefore we need to rely on other sources of vitamin D to ensure adequate levels,” advises Scully.

“A lack of sun exposure can make it difficult to achieve optimal bone health. Research has shown that this lack of vitamin D can seriously impact our health at any age.”

One in eight Irish people over 55 is deficient in vitamin D [1], but that deficiency likely started in young adulthood. The crucial time to build up a child’s bone density is up to the age of 18. It’s like investing now for your future bone health, yet worryingly 94 per cent of children in Ireland have inadequate intakes of vitamin D [2], which is a concern for Ireland’s population.

Scully says that, “while vitamin D deficiency has been identified in children and older people,” there hasn’t been as much focus on “what’s happening in the middle”. But her upcoming research has done just that.

“I analysed data on over 35,000 people,” she says, “and basically I’ve found that there’s quite a stark level of deficiency in Ireland. We knew what it was like in older people and in children, but for the group in the middle, it wasn’t clear. That research is soon to be published in full.”

Scully explains that vitamin D plays a critical role alongside a number of other nutrients to help support healthy bones and a healthy immune system.

“While you might feel fit as a fiddle now, it’s not until you’re older that you start seeing the longer term repercussions of a diet with inadequate levels of vitamin D.

“Ensuring adequate levels of vitamin D in your diet can support bone health in later life and also supports the normal function of your immune system.

“When you’re about 18 your bone mass is close to reaching its peak, but then after declines naturally due to ageing. People may not be aware of the nutritional impact of cutting out dairy or switching to unfortified non-dairy milks.

“People switching to unfortified non-dairy milks are not always aware of the implications that this could have on their nutritional intake. For example, vitamin D is vital for the absorption of calcium in the body and the two work hand in hand. Dairy milk is a natural source of calcium which is an important nutrient for bones, but not all non-dairy milks are fortified with calcium.

“For people in their twenties, thirties and forties, it is likely that they won’t appreciate their bone health until they potentially have issues when they are older. At that stage, it can be difficult to reverse.

“There needs to be a greater appreciation among younger people that prevention in this case is better than cure.”

Scully recommends not taking the risk and encourages people to be proactive in looking after their health and ensuring they are getting the recommended amount of vitamin D.

Eating a balanced diet and including dietary sources of vitamin D such as oily fish, including salmon, mackerel and herring plus egg yolk and fortified foods is important [3].

If you have concerns about your vitamin D levels, contact your GP to discuss.

The information in the above article relates to all natural dietary sources of vitamin D, fortified foods and supplements.