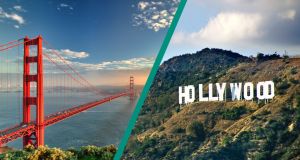 San Francisco and Los Angeles have plenty of different experiences to offer visitors this autumn and winter.

The sun-drenched shores of California are undoubtedly one of the biggest attractions for making a trip to the west coast of America. However, it is in the Golden State’s cities like San Francisco and LA where you will find a whole lot more than just beautiful beaches.

Beyond the famous Golden Gate Bridge, San Francisco will dazzle you as one of America’s finest food destinations. Renowned chef Alice Waters of the restaurant Chez Panisse was the pioneer of the 1970s farm to table movement. The city has a cool, radical edge having been the birthplace of the “Summer of Love” in the 1960s as well as the gay rights movement.

Alongside the amazing food, there are the city’s famous cable cars, fantastic art galleries and museums, buzzing Mission District and infamous Alcatraz prison. For wine lovers, it is worth taking a trip out to Napa or Sonoma Valley.

Los Angeles is a huge, sprawling city with endless, different experiences and attractions to visit. It is much more than just movies, there are also fantastic galleries, museums and places like Griffith Park that are well worth a visit. With an extended Metro system and Uber, tourists can now access different parts of this exciting, creative city more easily than ever before.

Catherine Barry moved to the US intending to stay for a summer and has spent 25 years in the city where she works as director of Irish Culture Bay Area.

“San Francisco is not your typical American city. It is small enough to explore and get a good feel for in a few days. The weather is a bit weird in the summer but outside the summer can be the best times for great weather.

“It’s a city on a bay so there are lots of water, bridges, boats and piers. The west end of the city meets the Pacific Ocean with lovely stretches of beaches and there are lovely coastal hikes and whale watching. The Golden Gate Park - pictured above - connects the city with the sea. San Francisco is especially known for its restaurants and the food here is pretty amazing. From Italian in North Beach to Mexican in Mission District to Chinese in Chinatown to all-American diners. I love a great Indian meal in the Tenderloin area, known also as “Tandoor-loin” or an old fashioned diner meal at the historic John’s Grill, home of Dashiell Hammett’s “The Maltese Falcon”. In Chinatown you could also check out the Great Eastern Restaurant where Obama surprised staff by arriving and ordering dumplings to go.

There are the great well-known art galleries like de Young, Legion of Honor and San Francisco Museum of Modern Art, but there are also interesting, quirky places like the Beat Poets Museum or Haight-Ashbury which is the former home of Janis Joplin, Jimi Hendrix and Grateful Dead.

A great way to see the city is to do a walking tour with City Guides. There have been a ton of famous movies shot here but I always encourage visitors to watch Hitchcock’s Vertigo movie before coming out. Must visits are Fisherman’s Wharf (pictured above), Alcatraz, also the Academy of Sciences in Golden Gate Park. While in this park which reportedly has one million trees, don’t miss the herd of bison or the Conservatory of Flowers which is one of the oldest Victorian glasshouses in the US.

I have to give a shout out for my own Irish Arts and Writers Festival in October where around 20 Irish authors, artists and poets join US counterparts and showcase the best in contemporary Irish arts and literature. This year’s line-up includes Fintan O’Toole and Paul Muldoon.

Street food on rooftops
It can get crowded early at El Techo, a rooftop hotspot at the heart of the Mission district, but the crowds are worth it. Great views, San Francisco-essential wind protection and fantastic Latin American-themed street food and cocktails.

Wineries
If you can’t make it to Napa, there are more than a dozen wineries within the city limits of San Francisco. They don’t grow their own vines but many have production onsite and the tasting rooms in each are a fantastic education – and a lot of fun. Try the Bluxome Street Winery in Soma.

Ocean sounds
Track down the Wave Organ, an art installation on a jetty in the bay. Specially built pipes transport sound created by the ocean to an excited audience. It also comes with fantastic views of Alcatraz (pictured above), the city skyline and the Golden Gate bridge.

Adrienne Borlongan was born and raised in Los Angeles. She is the chef and owner of Wanderlust Creamery, a Los Angeles-based artisanal ice-cream business.

“I grew up in a part of LA called “The Valley,” that is, the San Fernando Valley. Before opening Wanderlust Creamery, I worked as a mixologist for SBE, an LA-based hospitality group with nightclubs, restaurants and hotels in Los Angeles, Miami, Las Vegas, and Dubai.

“We make ice-cream inspired by travel; each flavour is based on a specific destination in the world, inspired by places I’ve been or long to visit or childhood memories.

LA is one of the best cities in the world to enjoy life; there are so many experiences that are unique to LA. It’s one of the only cities in the world where you can surf some waves in Malibu (pictured, above right), at sunrise and hit the slopes to ski in the mountains before sunset on the same day. One thing that surprises first time visitors is the city’s vastness; it is way bigger in size than one could imagine.

A typical LA day is bright, sunny, and somewhere around 24 degrees, which can make every day feel like a holiday. A winter “Sunday Funday” in LA should consist of a visit to Smorgasburg LA to sample an assortment of LA’s most impressive food vendors, followed by a stop at The Do Over at Grand Park to experience the city’s best house music.

“If I could give an LA introduction to an out-of-towner, I’d spend half the day driving them down Sunset Boulevard (pictured, above left). You could literally experience all the different facets of life in LA on this one street alone. I’d start in gritty Chinatown, through less shiny Echo Park and watch it turn into trendy Silverlake. Then through the seediness that surrounds the tourist traps in Hollywood, meander along the glamour of the Sunset Boulevard of West Hollywood which transcends to the affluent Beverly Hills.

“I’d detour on Canon Drive between “little Santa Monica” and Sunset for an iconic picture of palm tree-lined streets and fancy cars in front of mansions. Then on to Brentwood and Pacific Palisades, ending at the Pacific Coast Highway, where I’d drive them along the ocean in Malibu and up through Topanga Pass to the Valley. You could easily hire an Uber to do this, but just make sure they make a pitstop at an In-N-Out.

Every day, hundreds of people move here with the feeling they were too big for their hometown or meant for a destiny bigger than one back home. Because of this, LA is home to many bright, talented, progressive and innovative people and it’s very motivating to live here. The downside to this is that you get a lot of “those” personalities; everyone is someone, and if they’re not someone, they must pretend to be, it’s the LA culture. Locals on the other hand, are very laid back and unpretentious. In LA, people should explore all that is not Hollywood. Experience the lifestyle that’s made possible by the weather, and the culture that’s made possible by the city’s diversity.

Read up
With the tagline ‘What are you waiting for, we won’t be here forever’, The Last Bookstore is California’s largest second-hand book and vinyl store and a hive of activity for LA’s arts scene. A mix of Victorian drawing room and bohemian chic.

Offbeat bar
Looking for a great whiskey house in a log cabin with its own stuffed bear? Then Big Foot Lodge might just fit the bill. Described as like drinking in Twin Peaks, this quirky bar on Los Feliz Blvd is stuffed with taxidermy and offbeat LA charm. A popular hangout for local musicians, the sign over the bar reads “Bigfoot doesn’t believe in you either’.

Go Upside Down
Stranger Things fans will be delighted to know that the Upside Down world from the hit Netflix show will be added to Universal Studios this autumn. The maze attraction is being developed in collaboration with the series creators, the Duffer Brothers. So if you can’t wait for the series three you can visit the world of Eleven and long lost Barb once its launched during the Universal Halloween Horror Nights festival.

[Aer Lingus flies to Los Angeles up to six times a week. Book now and look forward to a happy winter]