In partnership with Society of Chartered Surveyors Ireland 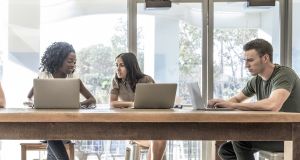 Companies view shared office space as a place to network, share ideas and benefit from an extended eco-system of like-minded companies and individuals. Photograph: iStock

As technology is changing the type of work people do, it is also transforming where they do that work and under what terms and conditions. This is now also revolutionising the traditional view and structure of the office market: long leases and single-occupancy buildings are increasingly passé as new and old companies flock to shared office space on short-term leases and view that space for the service it provides them – a place to network, share ideas and benefit from an extended eco-system of like-minded companies and individuals.

Padraic Rhatigan of Galway-based developer JJ Rhatigan says shared office space is “growing and evolving” and suits a percentage of the occupier market that needs flexibility – “the likes of start-ups, firms in transition and overseas companies making a foreign direct investment”.

A number of flexible workspace operators have moved in to occupy this market and ride the emerging wave made possible by broadband and the increasingly freelance- and contractor-centric world of work where specialists collaborate with clients on projects anywhere around the world.

Some of the big names in this flexible workspace environment are WeWork, the Iconic Office group and Dogpatch Labs.

Iconic, for example, was set up by Joe McGinley in 2013 and now rents out office space at 16 locations over some 23,225sq m (250,000sq ft). Its unorthodox stable of buildings is aimed at start-ups, innovators and entrepreneurs where the emphasis is on creating a vibe, making a statement and getting away from bland spaces. Its latest project, the Greenway on St Stephen’s Green, offers 2,880sq m (31,000sq ft) of office space decorated at a cost of €2 million and complete with graffiti art by Rarekind. A similar approach was taken at its Brickhouse scheme on Mount Street.

In January, Iconic took over Herbert House at Harmony Row just off Lower Grand Canal Street in an up-and-coming part of Dublin 2 favoured by tech companies. It took a 25-year lease on the building at 430.56 per sq m (40 per sq ft) and invested heavily to create a basement gym, outdoor heated terrace and extensive kitchen area all backed up by top-end IT facilities. The idea is to create a culture-driven space which will act as an incubator for aspiring start-ups.

US firm WeWork, which also provides trendy office space on flexible leases, has just moved into the Dublin market after agreeing to rent 4,645sq m (50,000sq ft) on George’s Quay at the former Ulster Bank HQ and another 5,109sq m (55,000sq ft) at Iveagh Court on Harcourt Road in a building that was previously occupied by the Central Bank. Considering the rents it is paying, about €613 per sq m (€57 per sq ft) at George’s Quay and €538 per sq m (€50 per sq ft) on Harcourt Road – not to mention the quantum of space involved – these lettings are no mere toe-in-the-water. They reflect a serious statement of intent about the direction the office market is taking and the anticipated level of demand out there for flexible, short-term space.

WeWork, recently valued at more than $17 billion, is expected to have its Dublin buildings ready for fit-out next year and is also planning to open serviced offices in every UK city. Its planned new office in Waterloo, central London, is billed as the world’s largest serviced office building. The company principally targets start-ups, although some of its tenants are larger firms looking for extra space for specific projects.

Dogpatch Labs at CHQ in Dublin’s north docklands – now home to more than 45 companies – is a great example of how a co-working hub which provides space for start-ups is attracting attention from more traditional companies keen to explore the innovative potential of companies located there. In July, Unilever announced a partnership with Dogpatch to allow its start-up collaboration platform, Unilever Foundry, explore business ideas with early-stage Irish companies in the fast-moving consumer goods space. Unilever, whose brands include Hellmann’s, Knorr and Dove, sees Dogpatch as an access point to innovative thinking around marketing and sustainable living which could, ultimately, help it improve its business and provide Irish start-ups with a major client.

Meanwhile, high office rents and a serious squeeze on space are encouraging companies in Dublin to come up with different solutions to meet their office requirements or make the most profitable use of their office space.

Chief among these are short-term measures to better use the space companies already occupy, like reducing desk size and introducing hot desking. By adjusting its office layout and working practices, for example, PwC recently achieved a 4,000sq m (43,500sq ft) space saving at its Spencer Dock premises. Firms which took leases on more space than they currently require in order to meet anticipated future growth have been tempted to sublease excess space on a short-term basis to take advantage of the strong rental market. Workday and Stripe are two examples of this while Dropbox sublet 2,790sq m (30,000sq ft) at Park Place on Hatch Street to Slack in 2016.

Subleasing much smaller amounts of space than the previous examples is also a growing trend. This is a more expensive option for renters, but it does offer flexibility and space to expand in sought-after central locations. The short-term let can also suit fast-growing tech companies which typically start off small and can then grow quickly. It even suits established companies to find temporary homes while their offices are being redeveloped – like the ESB’s move to from its Fitzwilliam Street headquarters to East Wall Road.

So-called “near-sourcing” is another approach being used to beat the squeeze on space by some companies. This is where large firms based in the city centre locate certain office functions to cheaper suburban locations while maintaining smaller offices in the city centre. Companies like Mason Hayes & Curran and Google have deployed this strategy, which is a relatively common practice in the UK, recently in Dublin .

The Dublin office market is so tight at present that refurbished office space in buildings undergoing refurbishment is also available to let on a short-term basis. This so-called “swing space”, in areas away from where refurbishment is taking place, is typical of a market with a shortage of supply.

In construction, time is money

Why drones are taking off

The main trends in the property rental sector

Planning for a population increase of 1 million people

Taking the risk out of lease agreements