With Ireland close to full employment and vacancies across many sectors, the main concern now is the impact Brexit may have on jobs 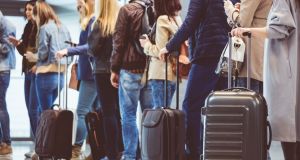 Brexit uncertainty may be attracting candidates to these shores. Photograph: iStock

How the labour market looks depends very much, like any market, on whether you are buying or selling. For job-seekers, the good news is that it’s tightening. For employers, that’s the bad news. Overshadowing both right now is Brexit and the impact, if any, it is likely to have on jobs.

“We haven’t seen any sign of it yet but it’s inevitable that companies will start to delay decisions around investments, including headcount,” says Mike McDonagh of Hays Ireland, a recruitment agency. “On the other hand, there is still quite a lot of juice in the domestic economy, the indigenous sector is growing and FDI [foreign direct investment] is very healthy.”

The most recent Central Statistics Office Labour Force Survey, for the third quarter of 2018, puts the seasonally adjusted unemployment rate at 5.7 per cent. From an employer’s perspective, that’s ominously close to full employment, traditionally considered as being hit at 5 per cent.

Employment increased across 10 of the 14 economic sectors the CSO looks at – the highest being construction (up 13.9 per cent) and administration and support activities (13.5 per cent).

Brexit uncertainty may be attracting candidates to these shores. “We’ve experienced a slight increase in tech talent that would have been in the UK – some people originally from Ireland and some from elsewhere in Europe – who see the whole Brexit issue as being too unclear in terms of what the direct impact might be on them and their family,” says Clare McDonald of recruitment agency Stelfox.

“These are Irish people and Europeans, many of whom want to settle somewhere where there is an English-speaking education system. It’s on top of the uplift economically here overall, but Brexit is playing a part and Ireland is recognised as having one of the strongest tech scenes in Europe.”

The Government’s Expert Group on Skills has been looking at the potential impact of Brexit on other sectors too, in consultation with exporters in agri food, health and life sciences, high-value manufacturing, construction products and services, as well as technology.

The UK is an important market for many, it found, with customs clearance and financial management deemed areas of particular skills deficit, most obviously among SMEs.

The agri food sector is particularly exposed to Brexit, as the UK not only represents a major market but is also used as a landbridge for exports to Europe.

Integrated supply chains and the prevalence of Just in Time deliveries will be impacted by customs or tariff changes but diversification into other eurozone countries is seen as a natural hedge, leading to a possible increase in demand for candidates with language and cultural skills.

Health and life sciences is dominated by major multinationals, which typically have the resources to deal with challenging trading conditions and territories, though here too the group found concerns about regulatory divergence.

The technology sector is in a better position than most, it found, given that it pays well, is able to attract highly skilled individuals from across the world and is less reliant on the UK as a key market.

The construction sector was found to be “relatively relaxed” about Brexit, with some seeing opportunities associated with the relocation of organisations from London to Dublin.

Things are more fraught in freight. The transport, distribution and logistics sector is, the report found, characterised by low wages, a perceived lack of career progression and unattractive hours and conditions, contributing to a shortage of personnel such as lorry drivers.

Further challenges here include lack of customs clearance expertise and likely changes in import and export markets. To compound the issue, lack of certainty around Brexit is leading to a lack of willingness to invest in the very skills training that might help them cope.

Between them, these sectors make up about 73 per cent of the total annual increase in employment but are “at the lower end of the productivity spectrum”. By contrast, higher productivity sectors such as professional and scientific services, finance and ICT, have expanded more modestly, it found.

The overall buoyancy of the jobs market is being experienced by employers in the form of both increased staff turnover and rising wages. Ibec reported pay growth of 3 per cent in the first half of 2018, compared with 1.7 per cent in 2017. Wage growth occurred across all sectors but was strongest in ICT and financial services, it said.

For jobseekers, however, it isn’t just wages that are being looked for. “Candidates are much more inclined now to look at the full range of benefits, including healthcare, pension, maternity and paternity leave, opportunity for flexible working and overall work life balance,” says Mike McDonagh.

“Organisations have to be more agile and creative about the packages they put together for people, though of course, if you don’t pay enough, it doesn’t matter how many beanbags you have. In any case, employees have seen through the foosball tables and free food and see the strings that come with them in terms of an expectation of longer working hours.”

The novelty of the so called “gig economy” is wearing thin too. “Short-term contracts will suit some people and companies will always need access to that kind of flexibility. There will always be a cohort of professionals who can build a career on contracting and who are highly sought after,” says McDonagh.

For others, however, there is a move towards permanent roles, “which may in itself be a response to Brexit”, he says.