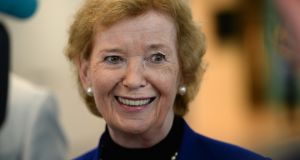 Mary Robinson has done much to raise the profile of justice and equity in the midst of the climate and biodiversity emergency. Photograph: Dara Mac Dónaill

Big changes in our economy, governance and individual behaviours are needed to reduce the impact of the climate and biodiversity emergency on the planet’s life-support systems and people’s wellbeing. So, who are the people who will be key sources of expertise and who have the communication skills to influence people’s behaviour, business practice and public policy?

With her specialist knowledge in human rights law, international policy and governance combined with an ability to communicate the implications of climate change for the poorest and most vulnerable, Mary Robinson has done much to raise the profile of justice and equity in the midst of the climate and biodiversity emergency. She is director of the Mary Robinson Foundation – Climate Justice and her profile as a national and international leader has enabled her to engage with audiences from Ballina to Bogota.

A great example of her ability to bring her message to new audiences is when she joined forces with another Irishwoman, the comic Maeve Higgins, to deliver her message of feminist climate justice on the Mothers of Invention podcast (mothersofinvention.online). As adjunct professor of climate justice at Trinity College Dublin, Robinson continues to inform, educate and inspire new generations of climate change influencers.

Robinson has recently called for the massive global response to economic recovery from the coronavirus crisis to have a strong green emphasis: “The threat from climate change is as real as the threat from Covid-19, though it seems far away.”

Lyndsay Walsh is one of the new generation of climate influencers and was recognised with a Climate Ambassador Award for her work in communicating and taking action on climate change. Walsh studied international development and is passionate about bringing the message of climate change out of the “environmental issues” silo and into all aspects of people’s lives.

Her message on tackling inequality in the climate crisis has been heard at the highest levels of the International Monetary Fund. She recently spoke to IMF chief economist Gita Gopinath about her award-winning article in the IMF’s journal Finance and Development.

Walsh is working in the United Nations Climate Change group, helping low- and middle-income countries build their capacity to both reduce emissions and adapt to the impacts of climate change.

Agriculture is front and centre for both challenges and solutions to the climate and biodiversity emergency. Agriculture is the single largest contributor to greenhouse gas emissions in Ireland and agricultural intensification is a driver of biodiversity loss. Matthews is professor emeritus in agricultural economics in the Department of Economics, School of Social Sciences and Philosophy at Trinity College Dublin and a key influencer nationally and internationally on agricultural economics and policy.

His CAP Reform blog (capreform.eu) has the refreshingly direct tag-line “Europe’s common agricultural policy is broken – let’s fix it!”. The twists and turns of CAP reform are laid bare, with key articles on climate mainstreaming of the EU budget and agriculture in the European Green Deal. The future financing of agriculture in Ireland with implications for how land is used and managed will be closely tied to European policy.

Peter Thorne is a professor of physical geography (climate science) at Maynooth University and leads the assessment of the changing state of the climate system for the next (6th) UN Intergovernmental Panel on Climate Change (IPCC) report. His expertise on climate observation and the measurement of climate change is critical to determining where, how much and how fast the climate is changing worldwide. These measurements inform the solutions that can be deployed to reduce the impacts of climate change.

The IPCC’s reports are commissioned by governments worldwide to provide the best scientific evidence and advice on climate change, including mitigation and adaptation strategies for governments and society. These reports are critical for communicating the scientific consensus on climate change and form the basis of national and international policies.

Irishman Terry Hughes is professor of marine biology at James Cook University in Australia. He is a tireless advocate for Australia’s Great Barrier Reef and is lauded for his scientifically informed and passionate communication about the effects of climate change on this iconic ecosystem. Hughes’ scientific research has focused on the effects of rising ocean temperatures on coral reef health and his research group has documented extensive and highly damaging coral bleaching events associated with high ocean temperatures. His direct communication style, backed by rigorous science, has landed him in hot water with the political establishment and won him the Maddox prize for “standing up for science”.

Cara Augustenborg is an environmental policy fellow at UCD, former chairperson of Friends of the Earth Ireland and co-hosts the Down to Earth slot with Ivan Yates on Newstalk FM. She is a passionate communicator about environmental issues, including climate change, and co-hosted RTÉ’s Will Ireland Survive 2050? documentary with meteorologist Gerald Fleming.

Yvonne Buckley is professor of zoology at Trinity College Dublin

*This article has been amended to correct a factual error. 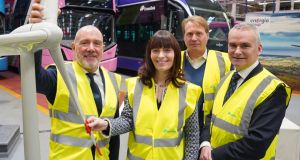 With multiple projects across domestic and industrial spheres which include hydrogen electrolysis and anaerobic digestion, Energia is at the forefront of renewable energy

Heating up the energy debate

VW’s new car claims to be carbon-neutral at birth

Sorting out our plastic problem