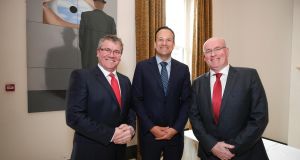 With more than 300,000 customers in the US and Europe and 500 staff spread across three countries, Netwatch is well on the way to achieving its founders’ aims of becoming a global security company. The company recently announced a merger with NMC of California, CalAtlantic of Texas, and UK firm Onwatch to form one of the largest security monitoring companies in the world.

It’s been quite a remarkable growth journey for a company which started up as a two-man operation with no products and no customers in Carlow in 2002. And it started up almost by chance, according to founder and chief executive David Walsh.

“A friend had been attacked and hospitalised when he went to attend a burglar alarm alert at his business premises,” he recalls. “He had to attend personally because of continual false alarms. I thought there had to be a better way of doing it and came up with the idea of monitored alarm systems using cameras. The initial idea was just to have a visual aid to make sure the coast was clear before attending and it developed from there.”

Turning the idea into a reality was another question, however. “This was before the days of digital video,” Walsh says. “There was no WiFi even. We found a firm in Australia that was doing video transmissions for small-scale applications, so we hopped on a plane to Melbourne to find out more.”

Walsh and his business partner Niall Kelly found it would be possible to use the system for two-way transmission. “You could have a speaker and use it to challenge the burglars or intruders on your premises,” he explains.

Then came the big decision to leave their jobs. Walsh had joined agrifood technology leader Keenan Systems straight out of college in 1989 and by 2002 was MD of the company’s Irish market operations. “I intended to stay about six months to get experience but found the company addictive,” he recalls.

“It is a great, innovative, family-owned company which has been changing the world from Carlow. I had gone about as far as I could go, I suppose, so it was time to move on. Niall was working at a golf course at the time and we both packed in our jobs in October 2002. We got our first customer in February 2003.”

They decided to take a different approach to marketing the product. “Everything we were doing was very disruptive. The security industry is notoriously conservative and hadn’t really changed in 40 years. We positioned it as a technology and business solution rather than a security solution. That allowed us to sell directly to customers rather than through the installer base and it helped us to extraordinary growth. By 2007, we had turnover of €7 million and profits of €1.5 million.”

Then the recession hit. “We got all our staff together in a hotel in Carlow one evening early in 2008 and we told them we had two options: we could wrap ourselves around what we had and try to ride out the coming storm as best we could, or we could look at the recession as an opportunity for investment and growth.”

The decision was made to invest €3.5 million in a new R&D department and lab. “This was at a time when the recession was hitting very hard and what we were doing was very different. All we had been doing up to then was taking other people’s products off the shelf and through clever messaging, branding and PR selling them as our own solutions. Now we design all our own systems. We have created a brilliant team there.”

That also saw a change in business model. “Up to 2007 we had been like a lot of other companies. We sold hardware and charged for the monitoring and support services. We then moved over to security-as-a-service model. A lot of people said this wouldn’t work, but it has been very successful for us.”

“Our goal all along was to become a global brand,” Walsh says. “We had been dipping our toe in the water in the UK market at that stage. This was mainly on the back of Irish clients who had operations in Britain. In 2008, we decided to take the US market seriously.”

“From day one, we always had the US as a target. There was an alignment between the culture there and Netwatch. Customer service is very important there and we had always positioned ourselves as a high-value proposition which is very close to the customer. In the early days in America, it was all about building credibility. In general, companies in the US are quite slow to apply technology to their businesses.”

That credibility was given a significant boost when former Boston police chief Kathleen O’Toole joined the company’s board. Signing up MIT and Massachusetts General Hospital as early clients did it no harm either. According to Walsh, with customers like that on board it becomes relatively easy to sell a service.

A change of gear was required for the new growth trajectory. “In 2015, we started building a senior management team which would be capable of driving international growth. We also set out our 2020 strategic vision for the next five years.”

That strategic vision included four key elements: continued investment in technology to improve service to customers; raising strategic funding to finance growth; investment in Netwatch employees; and achieving turnover of €100 million by 2020 – up from €16 million in 2015.

“We have a responsibility and a moral obligation to invest in our staff,” Walsh adds.

“That’s when the possibility of growth through mergers and acquisitions came onto our radar,” he notes. “We raised €20.5 million in funding and drew down €19.5 million over the next few years. In 2016, CalAtlantic in Texas reached out to us. They were at a crossroads and were either going to sell up or look for ways to grow. At around the same time, Samir Samhouri, the chief executive of Xtralis, one of our suppliers, reached out to us. He loved what Netwatch were doing and wanted to broaden his own horizons. He spoke to us about the multiplier effect and what we could do if we combined with other companies. Then NMC in California came along.”

NMC came with a network of 1,000 resellers. “We got talking to the resellers and they told us they were crying out for video. That gave us the opportunity to combine the west and south to our existing operations in the north and east of the US. That’s when we looked at the UK again. If you want to be a truly global leader you’ve got to have a significant presence in the UK. That’s when Onwatch came on board.”

That put together all the ingredients for the merger, which formally took place in April. The result is a company with a combined turnover of €60 million. “We are well on the way to achieving our €100 million target. Our ambition now is to grow into new markets like mainland Europe, where video is still in its infancy.”

The market for video is growing in any case. “This isn’t a wave, it’s a tsunami,” Walsh says. “We can save organisations around €100,000 a year per site over traditional security methods. The level of false alarms from traditional systems has grown to the extent that police forces will no longer respond to alarm calls without visual verification.”

His advice to anyone else thinking of starting up a business with global ambitions is to think big. “The first and most important thing is to think big,” he says. “Back in 2003 when we started out, we said we were going to build a global brand. That was scary. But if it’s not scary it means your goals aren’t big enough. After that, you’ve got to talk about it. Then something has to happen. Either you start doing it or you stop talking about it.”

Communication is key. “You have to communicate your vision and ambition to all of your employees. And you’ve got to surround yourself with people who are comfortable with that vision and who embrace change and understand that change is necessary to achieve great things.”

The Irish card will only get you so far, he says. “Being Irish will open doors in the US, but it doesn’t win business and won’t close deals. You have to have a clear value proposition and strategy to do that. The big challenge in America is that it is like 50 different countries, such is its scale. You have to understand that and be prepared for it.

“You have to think big, talk big, and make it happen. Never allow yourself to be limited by the scope of your ambitions. The combination of passion and ambition is where real impact comes from. Here at Netwatch, our people expect us to think big and we do.”