Gaining a Michelin star, or two, requires a massive investment in terms of time, sweat and hard cash. Is it worth it? 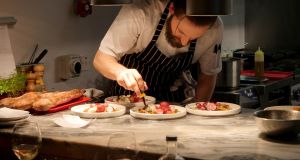 Head chef and owner of Variety Jones Keelan Higgs: “Since winning our star we’ve had 700 to 800 emails, so hopefully those seats will remain full every night into the future.”

Eighteen restaurants now hold a Michelin star on the island of Ireland while three restaurants are the proud holders of two stars: Patrick Guilbaud at the Merrion Hotel, Dublin, The GreenHouse, Dublin, and Aimsir in Celbridge, Co Kildare.

At a time when restaurants are feeling the heat – increased VAT and rising commercial rates, an oversaturation of eateries in urban areas and an inability to find staff – some positivity was badly needed.

But does having a star make a massive difference to the bottom line?

Years ago, I was a sous chef in Locks when they won a Michelin star, and business tripled

Restaurant Association of Ireland chief executive Adrian Cummins says it does: “Put it this way, if you lost your Michelin star, it would put you at a disadvantage for business the following year. Michelin has a standard, credibility and it brings you into a different price point. The consumer knows why they’re paying a little bit more for the higher standard they’re getting, based on the star rating,” he says.

Newcomer to the guide, Variety Jones on Thomas Street in Dublin, had opened less than a year when it gained a star and the restaurant offers a more relaxed dining experience to previous Irish winners. Head chef and owner Keelan Higgs says the restaurant has been extremely busy since it gained the star. Having said that, it was at capacity most nights and for Higgs, it was never really about Michelin recognition but more about creating the type of food he wanted to.

“My cooking background has been at Michelin level, that’s my pedigree, but in terms of going for a star, I never really thought of it like that. I thought we would just open and try to do as good a food as we could with what we have. I wanted to do sharing style and if Michelin was to respond well to that, then great but for me, it was more about doing things the way I wanted to do them. It’s a great pat on the back that they see my personality on the plate,” he says.

However, Higgs acknowledges that being added to the restaurants worldwide listed in the guide will impact positively on profits.

“Years ago, I was a sous chef in Locks when they won a Michelin star, and business tripled. Instead of 40 to 50 people at lunch and 60 for dinner, we were doing 90 and 90 at both sittings. We still only have the same amount of seats at Variety Jones and can fit a maximum of about 54 people over two sittings, so that’s packed to the rafters. But since winning our star we’ve had 700 to 800 emails, so hopefully those seats will remain full every night into the future. You could say it might double business,” he says.

There are a number of people, especially among our business clientele, who will only follow the guide, especially when they travel abroad

Thirty years ago, Sallyanne and Derry Clarke opened L’Ecrivain restaurant in Dublin with a view to “doing good food and making people happy”.

In their first year, they were recognised with the then equivalent of a Bib Gourmand. “We were delighted with that. A listing in the guide in those days was amazing,” Derry says.

In 2001, they gained a star, something they both put down to consistency in the kitchen and front of house, and it put them “on the map, internationally”.

In terms of how it can positively impact business and bring more clients through the doors, Derry says it unquestionably does. “There are a number of people, especially among our business clientele, who will only follow the guide, especially when they travel abroad.

“The client will look for a Michelin star standard – they know they’re getting quality – and that is why the more stars awarded in Ireland, the better for us in general, as we’ve more to offer as far as the guide is concerned,” Sallyanne says.

Both Clarke and Higgs say the judging process is fair and blind, as far as they are concerned.

“The inspector from the guide books comes in and they will eat, pay the bill and when they pay they will give their card at reception and check if the owner is around. They won’t give comment and there’s a bit of small talk. That year, the inspector said he found a piece of paper stuffed down the back of one of the seats, and sure we thought we hadn’t a chance then, but when the guide came out we were in it,” Derry says.

Higgs says it can be nerve-wracking waiting for an inspector to call: “Any time there’s a table booked for one person under a certain name, you keep an eye on it,” he laughs.

“We ended up having two visits, the first was all positive, very friendly, he offered advice in a very passive way. I knew he was happy leaving – but we also knew we were a bit late to be added to the guide this year, so it was a nice surprise,” he adds.

Recently opened Mister S on Dublin’s Camden Street is run by head chef Dan Hannigan, who has worked for several Michelin-starred restaurants, including Locks. Michelin is not at the forefront of his mind but he acknowledges the power of the guide and how it can impact on profits.

“Michelin recognition isn’t something we have ever spoken about, we’re a restaurant that doesn’t take itself too seriously but when it comes to the food, we are very serious. If that was ever enough for Michelin to be interested then we would obviously be delighted, but all we truly care about is providing delicious food and caring service at good prices for people.

“I’ve worked in a couple of Michelin-star restaurants and was lucky enough to work in Richmond when we won a Bib Gourmand. The business shot up and we were pretty much always busy after that – a testament to the head chef’s consistency too, but the Bib definitely helped.

“I think the hard work is definitely worth it; people maybe don’t like Michelin all that much but I do think it’s the best rating system around. It creates a buzz for chefs and really makes it all worthwhile to know you are good enough for it. Take, for example, Gareth Naughton in Circa, Terenure, I’ve seen his ups and downs throughout the years and to watch him open his own place, and then get a phone call from him eight months later to tell me he won a Bib and the happiness that brought for him shows how amazing Michelin can be,” Hannigan says.

“This year’s awards were very exciting because I had many friends involved, winning Bibs and stars. Sometimes, there’s probably too much talk of going for Michelin recognition, but I feel like if people just do what they do, with passion, love and respect then only good things can come,” he adds.

Higgs says retention of the star will be down to consistency, which is key. “There is a heightened pressure to keep improving and tighten up, keep delivering in same vein,” he says.

Cummins says it is “fantastic” that 21 restaurants now have stars but says the VAT rate is going to “put huge pressure on those restaurants to keep the standards at such a high level”.

“There’s a cost involved to keep the number of stars in 2020. If you lost your star, there’s a psychology around that,” he concludes.