With Brexit looming and the global trading environment in flux, Ireland will play a crucial role in facilitating transatlantic trade in Europe 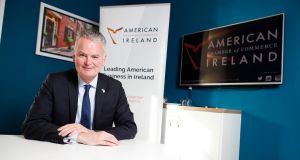 Mark Redmond, chief executive of the American Chamber of Commerce Ireland: “We constantly hear that the talent US companies find in Ireland is second to none – and that is across all sectors.” Photograph: Conor McCabe Photography.

With Brexit and current global trade tensions playing out, Ireland’s role in promoting the transatlantic relationship in Europe has never been more important. Next year, the American Chamber of Commerce in Ireland’s Transatlantic Conference, to be held in Croke Park in March, will provide a platform for many of these issues to be discussed.

The idea for the conference came about because of the need to future-proof Irish society and economy at a critical point in time for the country, Mark Redmond, chief executive of the American Chamber of Commerce in Ireland says. The conference will look at everything from ensuring there is sufficient choice available in Ireland’s residential sector, to looking at making the personal tax regime globally competitive from an international perspective.

“The conference will come when the great Brexit waiting game will almost be over and the global trading environment will continue to be in a state of flux. There are many risks out there for the competitiveness of the domestic economy. But we are fortunate to have a Government that is very open to a business point of view and we want to show the ambition of the US multinational community here for Ireland’s economic future,” Redmond says.

So what can Ireland do to build on its place in the transatlantic business relationship?

“I think first of all it’s important to recognise how inextricably entwined the business relationships here are – it’s a very special and longstanding relationship. US companies have been here for quite some time – many, in fact, are celebrating decades of operations. We know from public polling we completed earlier this year that the Irish public have a really deep appreciation of that role, the strength and depth of US companies here in Ireland. What we want to do is take the conversation about the two-way relationship to the next level,” he says.

Ireland continues to offer considerable advantages to US investors, according to Alan Connell, partner and head of tax at Eversheds Sutherland.

“Ireland has an open, pro-business economy with very few restrictions on trade – that offers significant opportunities to multinational companies for transatlantic trade across all business sectors,” he says. “This is clearly borne out by the fact that Ireland is the number one European location for emerging US FDI companies looking to break into European markets and beyond, while leading Irish companies continue to significantly grow their presence in the US. Post-Brexit, as the last common law, English-speaking country in the EU, Ireland’s role in promoting the transatlantic relationship in Europe going forward will be even more significant, thereby ensuring the continued success of the Ireland-US relationship.”

Ireland must also build on its FDI into the US in order to pave the way ahead in the context of the transatlantic business relationship. Sean Davis, Enterprise Ireland’s regional director for North America, says FDI flowing into the US from Ireland may not be as well-known as FDI coming here from America, but it’s a big success story.

Ireland is the ninth largest source of FDI to the US, with 800 companies employing more than 100,000 people. “This is a $19 trillion economy and there is opportunity for every industry,” he says.

‘Boots on the ground’

“Irish companies have to globalise in order to be successful, so in order to scale and grow a company, the two real fundamentals are: do I have a ready market and am I near it and do we have the cash to do it. Some of the larger companies that have grown in the US have fulfilled both of those criteria. The companies that do well are the ones that deploy and put the boots on the ground, and open an office in the US.”

In terms of a perception that the US may not welcome FDI in the same way it used to, Davis says it is important to read below the rhetoric and headlines.

“Irish business people are very welcome and many fundamentals economically and culturally have not changed,” he says.

Leo Moore, technology and FDI partner at William Fry, says US companies have consistently highlighted that what keeps them coming back to Ireland, and primary among the reasons for investing here, is talent.

“Ireland has a great track record in terms of investing in education and many companies are locating here because of the access to technical talent in particular. Additionally, our population is Europe’s youngest, and our labour force is amongst the world’s best qualified. Ireland has and will continue to be seen as a great place to do business – it remains part of the EU and it’s connected to a lot of other economies, which is very relevant for any international enterprise making future long-term business investment and location decisions,” he says.

Redmond agrees the big question on leaders’ minds is around talent – the requirements for it, the search for it, and the context of finding it in an economy approaching full employment.

“We constantly hear that the talent US companies find in Ireland is second to none – and that is across all sectors. Secondly, to serve global markets you need to have a global workforce. Over a quarter of the MNC [multinational corporation] workforce were not born here. So we’re looking at what that means in terms of inclusion. Thirdly, we have seen incredible pro-activity from Government and State agencies in building Ireland’s global relationship. The work IDA Ireland and Enterprise Ireland have done positioning Ireland as a location of choice for US investment is phenomenal. We need to kick on now to the niche activities we want to attract to Ireland in the next wave of opportunity – artificial intelligence, advanced manufacturing and cyber security. That means really focusing on competitiveness – and we’re looking to Government to move faster on these issues,” he says.