Why do girls outperform boys in the Leaving Cert? 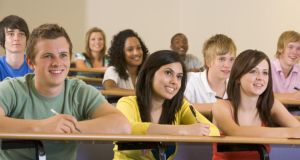 Girls outperformed boys in 50 of 58 Leaving Cert papers across higher and ordinary level, according to a gender analysis of this year’s results. This is part of a recurring pattern – and not just in Ireland. But why is this the case?

There are several reasons for this, according to a report earlier this year by the Organisation for Economic Co-operation and Development (OECD). Girls read more. They spend more time on homework, and usually spend less time online and playing video games. Boys think they’re too cool for school, where girls are generally highly motivated to do well.

Girls read more for enjoyment than boys, PISA surveys have found, and in particular, girls read more fiction, which is associated with high performance. They also found that on average, girls will spend five and a half hours on homework a week, against boys’ four and a half hours. In Ireland specifically, girls do eight hours’ homework on average, while boys spend an hour and a quarter less. Homework, unsurprisingly, has an impact on student performance, with students who spend more time on homework achieving better results.

Various studies considered by the OECD suggest the difference in attitudes towards school between the genders is strongly related to our idea of what’s masculine and what’s feminine. For many boys, an interest in school or academic achievement isn’t cool. Across OECD countries, boys were eight per cent more likely than girls to say school is a waste of time. They were also five per cent less likely to agree or strongly agree that trying hard at school is important.

Even if a boy understands why doing well in school will benefit him in the future, a fear of what his male classmates will think or say ends up stopping him from appearing to try too hard. While the OECD research found girls, on the other hand, have much less confidence in themselves and their abilities. They are socialised to fear negative evaluations, and be eager to please, making them highly motivated to do well in school. And clearly, it’s working for them. But is it a good thing?

The world over, girls are underperforming at maths and science, according to the PISA data. Its research found girls feel greater anxiety towards maths, and confirmed there was no innate reason why girls should be performing less well than boys in maths. In this field, boys outperform girls in 38 of the 70 participating countries.

Girls are doing well, but if the research is to be believed, they could likely do even better if there was an effort made to boost their confidence in their abilities, particularly in mathematical subjects.

Fostering a greater interest in school for boys would, according to the data from OECD, greatly improve their school performance. Parents should encourage reading, of any kind, as often they are prone to telling boys that reading comics or magazines isn’t “real” reading, when compared with reading fiction – but any reading is better than no reading, according to the PISA statistics.

A greater focus on homework is important, but so too is allowing enough time for the internet and video games, as both are learning tools in their own rights.

Maybe the answer for boys is for parents to draw up a “learning contract’ with them – this is one option the OECD report suggests. That way parents can set conditions for how much homework needs to be done before the boys can indulge in video games and internet time.

While girls are, year-on-year, outperforming boys when results roll around, it seems that the system is allowing neither girls nor boys to reach their full potential.