Why Brexit will be Margaret Thatcher’s revenge

Vernon Bogdanor: Those most likely to have voted for Brexit will suffer most after article 50 is triggered 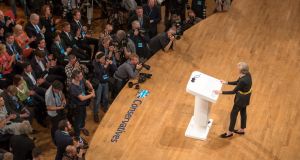 British Prime Minister Theresa May prepares to deliver a speech about Brexit on the first day of the Conservative Party Conference 2016 at the ICC Birmingham on October 2nd. Photograph: Matt Cardy/Getty Images

Article 50, providing for Brexit, will be triggered by the end of March next year, British Prime Minister Theresa May has promised. Two years after it is triggered, Britain will find itself outside the European Union, unless there is unanimous agreement among the other member states to extend the time limit.

Contrary to popular perceptions, article 50 inaugurates a withdrawal process, not a trade agreement. It will involve negotiating essentially technical issues, though important ones – such as the rights of British citizens in the EU and of EU citizens in the UK – and can be achieved within the two-year limit.

Article 50 does allow for a shadow negotiation on trade matters. But, clearly, the EU cannot conclude a trade agreement with another country until that country ceases to be a member, and it is highly unlikely that a detailed trade agreement can be achieved within two years. When, in 1985, Greenland – whose population is smaller than that of Uxbridge, and whose one staple industry is fishing – withdrew, an agreement took three years to negotiate.

Matters would be easier, of course, were Britain to emulate Norway and join the European Economic Area. That, however, was established for countries proposing to join Europe, not leave it. The EEA obliges member states to incorporate not only current EU laws, but also future legislation, into domestic law, and to accept the principle of free movement. It also subjects member states to review by a European court – not the European Court of Justice, but the court of the European Free Trade Association – and requires a contribution to the EU budget. Per head, Norway currently pays around 83 per cent of the British contribution.

In a more competitive and harsher world, it will be those most likely to have voted for Brexit who will suffer the most.

Since the Brexiteers wanted to end the supremacy of European law, supervision by a European court and contributions to the EU budget, this option will hardly satisfy them. It would indeed be worse than EU membership since it would involve EU regulation without representation, a kind of colonial status in which Britain would be dependent on others to look after its interests.

Some suggest the Swiss relationship as an alternative. Switzerland has negotiated, over a period of 20 years, some 120 bilateral deals with the EU. These have to be regularly revised and re-negotiated to take account of new EU laws, a cumbersome procedure. The EU dislikes this arrangement, and wants it to converge towards the Norwegian model. It is highly unlikely to replicate so broken a model for Britain.

Remaining in the EU customs union but outside the EU is open to the obvious objection that, when the EU signs a trade agreement with a third country, that third country would have access to British markets, but Britain would have no access to those of the third country.

Britain, therefore, may well find itself in 2019 trading under the rules of the World Trade Organisation – of which it was an original member – while still negotiating trade agreements with the EU and other countries. WTO membership, if Britain moved towards freer trade, would allow it to benefit from cheaper food from outside Europe – EU prices on beef and veal are currently around 30 per cent higher than world prices – cheaper cars, textiles and other goods subject to the EU’s common external tariff.

But the irony is that, contrary to the hopes of many Brexiteers, leaving the EU will expose Britain to more globalisation, not less; and in a more competitive and harsher world it will be the “left behind”, those most likely to have voted for Brexit, who will suffer the most.

Brexit, therefore, will be Margaret Thatcher’s revenge. It will suit the vision of the Tory right which hopes that, outside the EU, Britain could become like Hong Kong or Singapore, a global trading hub. These two territories have no natural resources except for their brains, which they use to the full.

Britain, by contrast, has a deep-seated skills problem, first noticed by Joseph Chamberlain – the hero of Nick Timothy, Theresa May’s special adviser – well over 100 years ago. The priority, if May’s socially responsible capitalism is to be become a reality, must be a radical skills policy. That means more resources devoted to further education colleges, currently the Cinderellas of the education service, and to university technical colleges, for those whose skills are technical and vocational rather than academic.

When, in 1950, Britain was asked to engage with the continent by joining the European Coal and Steel Community, precursor of the EU, foreign secretary Ernest Bevin declined, warning that once one opened that Pandora’s box, all sorts of Trojan horses would fly out. Today it’s clear that Brexit too will release a multitude of Trojan horses.