Una Mullally: Women were right about Trump but will men listen?

Post-Trump Tapes, will women be more ‘allowed’ call out misogyny as they see it and experience it? 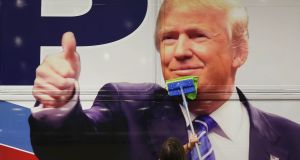 Bailey McDaniel wipes off the side of the campaign bus of Republican presidential candidate Donald Trump before his campaign rally at the South Florida Fair & Expo Center in West Palm Beach, Florida. Photograph: Joe Raedle/Getty Images

Women are used to having their concerns about sexism and misogyny and gender bias and discrimination ignored, undermined, or shouted down, so in a weird kind of way, Donald Trump is one big “I told you so.”

Of course, Trump isn’t exactly representative of “the common man” even though he claims to represent them. But he has traded on male privilege, whiteness, wealth, and what sinister oddball Nigel Farage would call an “alpha” disposition. We are nearly two weeks into Trump’s final push for his doomed campaign, which will coincide with the most acute build up of scandal after scandal. It is a live feed of incidents a single one of which would end the average political career. Trump is a political Marshmallow Man, plodding through the streets of Manhattan swatting off military fire and buzzing helicopters, until the inevitable final scenes, when he is pulverised by a band of (women) Ghostbusters.

Women were right about Trump. They were right about a guy who sees women as objects, as non-people, as things to grab, demean, push over, pin down, drool upon, sideline, slap, shout at or talk trash. They were right about a guy who runs warped beauty pageants and who allegedly thought nothing of walking in on contestants naked. They were right about a guy seeing women as items for his own pleasure or gratification no matter what their age, such as the incident where he said to a 10-year-old girl that he’d be dating her in 10 years. His attitude was not just playful or “just words” and criticism of it were not the “liberal media” on a feminist solo run, or a conspiracy theory, or banter. These words are red flags, they are alarm bells, they are the canaries in the mine when it comes to sexual assault. Trump, like so many abusers of women, hides in plain sight.

As more and more women continue to speak out about Trump’s behaviour towards them, we have to wonder what we expected from a misogynist who has been tolerated for so long. His attitudes towards women are well known. Perhaps now we just know he’s worse than we thought. But how many columns were written by women journalists around the world about this already? How many women spoke out on television and on talk shows and on Twitter? How many times did Clinton have to bite her tongue? We knew this was coming. American women told you so. Turns out that if a guy views women so poorly, then he probably has acted on that point of view at some stage. Demeaning women is not just the thin end of the wedge of sexual violence, it is the root of it.

Post-Trump Tapes, will women be more “allowed” to call out misogyny as they see it and experience it? Women’s experiences, opinions and suspicions about misogyny in various sectors of society (including in US presidential campaigns) are deflected, minimised, and muffled. The reason that some men are uncomfortable with this fact being pointed out, or view it as shrill or attacking, is because they haven’t heard it to this extent before. Until now women were too scared or two powerless to name it and call it out.

If you’ve gone all your life with women being quiet about these things, and not talking about their experiences – of harassment, fear, assault, borderline consent issues, rape, abuse, groping, street harassment, online harassment, violence in relationships, workplace discrimination, being flashed, unwanted remarks, being forced into dodgy situations, being followed home, stalking, verbal abuse, and general sexism – that doesn’t mean women were not experiencing them. But it does mean that it being talked about now must sound pretty loud and urgent and uncomfortable to those who haven’t heard it before. That conversation is essential. In a strange way, maybe Trump will help us have it a little more.

So women were right about Trump, and they continue to be. But let’s not pretend that because Trump bragged about sexually assaulting women that this spells the end of his support. According to Nate Silver, if only men voted, Trump would win 350 electoral votes to Clinton’s 188. If only women voted, Clinton would win 458 to Trump’s 80. For a lot of men, Trump’s misogyny, sleaziness, belief that bragging about sexual assault is just “banter” and his terrible behaviour and words towards women, doesn’t impact on their support of him. That is scary because it shows – as women know well – Trump’s attitude and behaviour does not exist in isolation. When it comes to hating women, he is by no means alone. If we want to combat that hatred, we have to first admit it’s real and widespread. Stop telling us it isn’t. We know it is.

1 Steve Coogan: ‘Come Out, Ye Black and Tans is two fingers to the British’
2 Ryanair’s Michael O’Leary under fire for comments on Muslim men
3 Anti-Irish bigotry in Britain has not gone away
4 Founder of disabilities network with Irish centres sexually abused six women
5 Ben Affleck: ‘It took me a long time to admit I am an alcoholic’
Real news has value SUBSCRIBE