US president Donald Trump visibly floundered in a recent HBO interview in which he claimed the US has a lower number of deaths as a proportion of cases than “the world” and Europe. Video: HBO 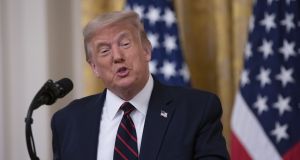 Whether or not US president Donald Trump, secretary of state Mike Pompeo or treasury secretary Steve Mnuchin really care about the risk of transmission to the communist regime in Beijing of personal data including facial recognition by ByteDance, the Chinese company that now owns the social media platform TikTok, is unclear. The White House has leapt on the opportunity to raise a scare about that risk and has indicated an intention to ban TikTok from the US market from September.

The present owners of TikTok took the obvious course of removing the alleged risk by offering to sell their American business which has tens of millions of customers to non-Chinese or US purchasers. US media giant Microsoft indicated a willingness to purchase TikTok operations in the US.

Depending on the price, and assuming that the proposed sale would not be conducted as a complete fire sale, the concerns of the White House, if they were genuine in the first place, would seem to be addressed in a manner that would leave the reluctant vendors and the willing purchasers better off than if TikTok had simply been closed down in the US.

But things were not as they seemed. Once Trump became aware of the proposed Microsoft buyout, his baser instincts and his sense of deep frustration that his confrontation with Beijing was being avoided both came to the fore. At first he tried to stop the sale but failed.

He then announced a new demand. He wanted a substantial part of the purchase price to be paid to the US treasury. This meant that a fair price, if agreed on, would not be paid for a valuable US business (described by Trump as a “hot brand”) to its owners but would be stolen in part by the US government.

Outright theft. There is no other way to describe Trump’s demand for a US treasury cut. Stunned commentators likened it to the actions of the mafia. You threaten to put someone out of business. They decide to sell out. The local mafia don then demands a slice of the sale price. This time, however, the local don is the Donald himself.

And Trump the thug spoke truly when he tweeted about this extortion. He gloried in his thievery. “Nobody would have thought of it but me”, he said. But that was the grossest vanity, not sombre introspection.

It would also be illegal to demand such a cut from the purchase price. Unless the law were changed by Congress, the White House has no legal right to either demand or take such a cut or to impose such a condition on a sale.

Of course all of this is part of the Trump campaign’s cynical electoral strategy of playing tough with China. When he had previously met Chinese president Xi Jinping, Trump brazenly asked for increased Chinese imports of US agricultural products on the explicit basis that it would boost his electoral prospects in the American midwest. But that was then.

Now, it’s all about fabricating a massive lie that Joe Biden is either soft on, or in league with, China. He is hoping that Democrats will swallow the bait and take the Chinese owner’s side on his TikTok racketeering scheme.

Trump, as I have previously commented, is desperately looking for electoral scapegoats. China, Covid-19, the World Health Organisation, the World Trade Organisation, Biden and Obama are all the targets in his attempt to deflect blame from himself for the parlous state of the US economy, the handling of the pandemic (aka “the Dem-panic”!), and the threadbare state of his foreign policies.

Biden is playing a clever, low-key game, avoiding presenting any unnecessary targets for the Trump attack dogs. A recent CNN Smerconish call-in poll overwhelmingly supported the suggestion that Biden should avoid head-to-head television debates with Trump. Anyone who recalls Trump menacingly stalking behind Hillary Clinton in a 2016 television debate can imagine what kind of television stunt or accusation the recently pardoned Roger Stone would dream up for such debates this October.

Getting sucked into an electoral debate on US-China relations would be very unwise for the Democrats. After all, the Beijing regime is rotten at its heart. Like the German national socialists, it has harnessed controlled capitalism to a totalitarian ideology, and has ruthlessly imposed its rule by concentration camps, arbitrary detention, strict state censorship, state-imposed fertility policies and subjugation of internal minorities and abolition of basic human rights.

The Chinese too are notorious practitioners of the long game. There is every possibility now that Trump will lose the election within three months and have to vacate the White House within six months. They will not play into Trump’s hands by escalating retaliatory actions to the point of serious confrontation when time is on their side.

There are grounds to hope that Trumpism is in its death throes – dying but still dangerous. Sadly, there is still a three-month window of opportunity for his malice and thuggery to do further damage between November 3rd and inauguration day in January.