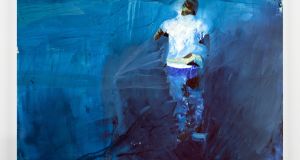 “Over Our Heads the Hollow Seas Closed Up” is the title of Maguire’s exhibition at the Kerlin Gallery in Dublin until August 20th.

The Irish painter Brian Maguire is an artiste engagé, a secular missionary who devotes his talent to a form of social protest. He has taught painting to poor children from Palestine to Brazil, and to prisoners all over the world.

At his atelier in the working class reaches of northern Paris, Maguire has just completed a series of paintings on the migrant crisis, because “what an artist has to do is reflect their time . . . That’s really what I’m trying to do, to reflect what is for me the biggest story in Europe – those deaths in the Mediterranean.”

Over Our Heads the Hollow Seas Closed Up is the title of Maguire’s exhibition at the Kerlin Gallery in Dublin until August 20th. It is taken from Dante’s Inferno, as quoted in Primo Levi’s Holocaust memoir, If This Is a Man.

In the signature painting of the exhibition, a black man wearing jeans and a white shirt floats in blue, blue water. Despite the terrible subject matter, it has a kind of beauty. “This is the method I’ve always used,” Maguire explains. “I try to make the pictures as beautiful as possible and their content as appropriate as possible; to seduce the viewer into accepting the work. There’s a form of seduction going on there . . .”

Maguire paints mostly from news photographs. Although his works bear a resemblance to photo reportage, they surpass news to become commentary and art.

Maguire’s previous series, on the drug war in Mexico, included gruesome canvases of severed limbs and heads, a charred corpse, human remains arranged like meat in a charnel house. It was shown at the Fergus McCaffrey gallery in New York last year, and at The Void in Derry last winter. A painting of Mexican police giving a Nazi salute drew attention when it was exhibited in Cologne.

Those were gruesome paintings, I observe. “I stick to what I said . . . I tried to make them beautiful. Some of the Mexican heads became very beautiful to me in the doing of them,” says Maguire.

Like Albert Camus, Maguire sees nobility in revolt. “If you say something with passion, if you are angry, in itself the thing is optimistic,” he told me years ago.

The Kerlin Gallery exhibition is comprised of eight paintings, starting with the lost beauty of Aleppo. A Kurdish woman poet told Maguire that the city’s famous soap was made from laurel leaves and olives for 3,000 years, so he painted a bar of soap. Then there’s a shell-gutted building in Syria’s martyred city, to show what the refugees are fleeing.

“War is a constant,” Maguire says. “It just changes its address . . . The war is being fought with weapons that were on sale at the arms fair in Paris last month . . . It’s our weapons that destroy their cities. What they’re fleeing, we know it’s horrific.”

“The bodies on the beach in Greece or Italy, they look the same as the bodies in the southern states of America,” Maguire explains. “They’re not coming here because they want our fucking ice cream, but because they want equality.”

Maguire drove from Paris to Greece and back through Macedonia, to see the conditions experienced by the refugees.

Even those who reach the safety of Ireland face years of bureaucratic process, which he illustrated with a painting of a metal frame bunk bed inside the direct provision centre in Hatch Street, Dublin.

“What interested me was the metal frame in which a life has to be lived, on average for six years,” he says. “They’d be moved around, from Limerick to Waterford and Kerry and Dublin. But essentially this is where their life is. That’s the space they own. The metal bed . . . There are kids who have to do their homework on a toilet seat.”

The Irish Museum of Modern Art, the Hugh Lane Gallery, Trinity College Dublin and Crawford Art Gallery in Cork own paintings by Maguire. His work hangs in museums from Texas to The Hague and Finland.

In younger days, Maguire overcame problems with substance abuse. “Because I was very low, it gave me a perspective for the rest of my life, which excludes judging people,” he says.

Art cannot save the world, but Maguire believes it is necessary.

“It’s terribly important that those people are recorded and given places of honour in our system. The only way I know is to make art that will recognise their existence . . . When the system fails to protect human rights, we’re left with the story. And the last thing is to tell the story.”