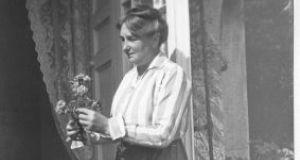 Louie Bennett. She kept the union she founded independent of Liberty Hall and male unions on the basis that women’s concerns would always take second place in male-dominated unions.

Louie Bennett, who was born 150 years ago on January 7th, was well known in 20th-century Ireland as a feminist, trade unionist and journalist but it was probably not so well known that she wrote two novels in her thirties. A Spectator critic described the first as “slightly crude but exceedingly clever and arresting”, while From Ireland in Fiction considered the second “a pleasant, exciting romance written in a vigorous and nervous style”.

There was little in her Protestant and unionist background or upbringing to suggest the direction her life would later take. Her father was a successful auctioneer and she was raised in the wealthy Dublin areas of Rathgar and Blackrock, attending Alexandra College and a young ladies’ academy in London before studying singing in Bonn in Germany. She immersed herself in the works of Victorian novelists such as Jane Austen and Charles Dickens and it might have been George Eliot’s books that turned her mind towards the rights of women. Her own two novels, The Proving of Priscilla (1902) and A Prisoner of His Word (1908) were commercial failures.

The campaign to win the vote for women had been gathering pace since the late 19th century and around 1910 Bennett became involved in the Irish suffrage movement. She and Helen Chenevix, who was to become her lifelong friend and colleague, founded the Irish Women’s Suffrage Federation (IWSF) in 1911 to bring together various Irish suffrage societies and forge links with similar organisations in Europe and the US. She also ran public-speaking classes for the Irish Women’s Franchise League but it was more militant than the IWSF and Bennett, who was a pacifist, gradually distanced herself from it.

She also set up the Irish Women’s Reform League to campaign on social issues that affected women, such as working conditions, legal rights, education and social welfare. During the 1913 strike and lockout in Dublin she helped in the relief efforts in Liberty Hall and sought to raise funds for the families of the locked-out workers through the Irish Citizen, the monthly organ of the suffrage movement. This brought her into closer contact with the labour movement but she disagreed with James Connolly’s approach of close cooperation between it and advanced-nationalist movements seeking independence because she felt that would hinder rather than help the pursuit of labour and women’s issues.

The murder of Francis Sheehy-Skeffington during the Easter Rising and the executions in its aftermath probably made her more sympathetic to nationalist demands. In late 1916, she accepted the invitation to reorganise the Irish Women Workers’ Union (IWWU), founded in 1911 by Delia Larkin because other unions wouldn’t accept women members, and with the help of Chenevix and others succeeded in establishing it on sound lines, leading to a dramatic increase in membership. She kept it independent of Liberty Hall and male unions on the grounds that women’s concerns would always take second place in male-dominated unions.

Her opposition to the war led to her being chosen as the Irish representative to the Women’s International League for Peace and Freedom. She campaigned against conscription in 1918, went to America in 1920 to highlight Black-and-Tan atrocities, and acted as a mediator during the Civil War.

Appointed to the Irish Trade Union Congress (ITUC) in 1925, she worked to promote working-class education and adult education and later became involved in the People’s College. A member of the national executive of the ITUC from 1927 to 1932, she became its first woman president in the latter year. She continued to serve for many years on the congress executive and had a second term as president in 1947.

Bennett failed to get elected to Seanad Éireann in 1938 but that year was appointed to the government commission on vocational education for a five-year period. In 1943, she was elected a Labour Party councillor in Dún Laoghaire, where she campaigned consistently for improved housing. She failed to get elected to the Dáil for Labour in 1944 but as an elected member of its national executive, she represented Ireland at the International Labour Organisation in Europe and was also a representative at the League of Nations.

She was a consistent opponent of imperialism, fascism and war throughout her public life. Probably her greatest success for which she is most remembered is her leadership in the 1945 laundry workers’ strike through which the IWWU won the right to a fortnight’s paid holiday (subsequently all Irish workers came to enjoy this right).

Remarkably, she continued to manage the IWWU until 1955, retiring at the age of 85.

She died the following year on November 25th in Killiney, Co Dublin, following almost half a century of dedicated service to others less privileged than herself.

1 Q&A: How long could it take to form a new government after Election 2020? Could things get messy?
2 David Baddiel comes to Ennis to meet a Holocaust denier
3 Love Island tribute to Caroline Flack hides the truth
4 Two Irish passengers test positive for coronavirus
5 €35,000 a bottle: most expensive Irish whiskey goes on sale today
Real news has value SUBSCRIBE