Health spending in one area cannot come at expense of another 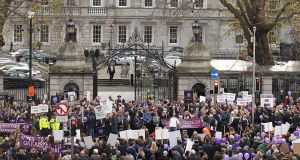 Protesters outside Leinster House calling for Orkambi to be provided to people with cystic fibrosis. Photograph: Collins

Many new drugs have become available to patients in the last decade. The majority of them are “biologicals”, drugs resembling complex natural molecules, and often manufactured by processes closer to brewing than traditional chemistry.

These drugs are usually far more expensive than traditional drugs, with typical prices from €20,000 to more than €400,000 per patient per year. These drugs fall into a number of groups, drugs for arthritis, drugs for various cancers, and, most recently, drugs to treat some genetic disorders.

Some of these drugs have very clear benefits, for example herceptin for some types of breast cancer, new drugs for multiple myeloma, and rheumatoid arthritis, and these have been adopted in most wealthy countries; others have much smaller benefits, for example some of the newer anti-cancer drugs improve average survival by no more than one or two months, and are much less widely used. If these drugs were cheap, there would be little controversy, but they are not.

Orkambi has focused public attention on this. This combination of two drugs can benefit a proportion of those with cystic fibrosis. The benefit is a modest reduction in hospital admissions, and a small improvement in lung function, over 24 weeks. It is not known how long this benefit will last.

There would be a cost in cash to doing this, of about €78 million a year, but there is also what economists call an opportunity cost, that is, money spent on Orkambi is money that could produce more benefit, if it were decided to spend it somewhere else.

To put these numbers in some perspective, total Irish healthcare spending in 2013 was just over €3,700 per person per year. If the goal of the health services is to improve health as much as possible, given the existing resources, then it is important to ensure that the benefits of spending in one area do not come at the expense of greater benefits in another.

Prof Michael Barry, clinical director of the National Centre for Pharmacoeconomics, has called for HSE and Vertex to enter into a risk-sharing arrangement.

Such risk-sharing links payment for a drug directly to its overall impact, either on budgets, for example reduced hospital admissions, or improvements in patient health.

In theory, this means a drug is made available to patients, but that either the health care system only pays for those who benefit, or that spending on the drug will be capped at a certain amount.

On the surface, paying based on a drug’s performance has distinct advantages for everyone; the HSE would be protected from funding drugs that don’t work, patients have access to new treatments and manufacturers have the opportunity to sell their product to a wider market.

In Ireland, risk-sharing has focused on guaranteeing total costs to the HSE and revenue potential for the pharmaceutical companies rather than patients’ health outcomes. Key to paying for performance would be finding a reliable and easily measured health outcome. This is probably not possible given our current health information systems, although this will change in the future.

In most cases, patients will be expected to take Orkambi over several years, but as yet there is limited data on the long-term benefits and risks of Orkambi. What should happen for people who do not respond is also unclear – should they continue on Orkambi, and if so who should pay for it?

While details of the proposed agreement have not been made public, there have been suggestions that the HSE would pay the full cost of Orkambi in those cases where it is effective. However, this arrangement would not address the high price per patient and may actually encourage other pharmaceutical companies to seek similar deals with the HSE.

These are all political decisions, and the choices made are heavily influenced by whoever shouts loudest.

It is, of course, reasonable and legitimate for CF Ireland, and similar organisations, to organise their members, to tell their stories, to lobby politicians, and put their individual cases for investment.

It remains the heavy responsibility of our health service managers, and for our politicians, to ensure that those less able to shout, the elderly, the young, and the mentally ill, do not lose out. Decisions about drug reimbursement, especially for very costly drugs, should be transparent, fair, and guided by a clear and consistent policy. Anthony Staines is professor of health systems at DCU and Bridget Johnston is a researcher at the school of health policy and management at TCD