Obama must also speak up for the victims of police violence 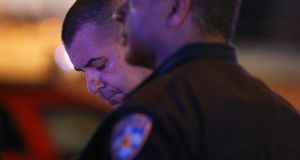 Police officers stand near the scene of where three police officers were killed on July 17, 2016 in Baton Rouge, Louisiana. (Photo by Sean Gardner/Getty Images)

About three weeks ago, I left the United States for Europe for a spell, hoping to take a bit of a break from reporting on the horrors of American violence, mass gun deaths, racism and police killings. Right before I planned to go offline entirely, I got an email from one of my editors asking me a question along the lines of, “Can you write something on Baton Rogue , Black Lives Matter and the police shootings?”

Concerned that not taking my scheduled news break might harm my mental health, I declined and took my vacation as planned. Not that my travels were exactly free from news, however: I started out in post-Brexit England, days after the vote left my black, immigrant and Muslim friends feeling vulnerable. Then, I went on vacation to the south of France, where I spent Bastille Day at outdoor festivities not exactly in the city of Nice, but not so far from it, either.

This left me on edge, but what really disturbed me was when I landed back in New York City on Sunday and got an email from the very same editor asking me, once again, if I could write something on Baton Rogue, Black Lives Matter and the police shootings. There had been yet another police shooting in Louisiana, he explained – though this time towards the cops.

Nothing, it seemed, had changed in America at all in the few weeks I’d been away. Not a damn thing.

I had been out of the country as the anger regarding Alton Sterling and Philando Castile had risen, and that seemed to have changed nothing. Even the horrifying death of the latter on live video did not stop American police from killing about two dozen more people since . Will the violence police are facing themselves make them act more peacefully, or just lead to more violence?

Certainly nothing has changed with how president Barack Obama has approached police violence. While I waited in the passport control line, I found it jarring that Obama was on one TV greeting visitors to the US with a recorded welcome message; at the same time, he was on a CNN monitor just a few feet away, scaring the hell out of visitors as he addressed the latest American mass shooting and declared : “Attacks on police are an attack on all of us and the rule of law that makes society possible.”

What made me especially sad was that Obama won’t also say that attacks by the police on black people are also “an attack on all of us and on the rule of law that makes society possible”. He certainly doesn’t seem to have changed much on this over the course of his presidency. I was also out of the country during the “beer summit” of 2009, when Obama had Harvard professor Henry Louis Gates and the white cop who’d arrested him outside Gates’ own home to the White House for drinks. At the time I thought this PR stunt was cheapening the serious issue of racial profiling by police.

But over the years, as Obama seems tortured whenever he has to talk about police violence, I began to think his failure to change how he thinks and talks about police violence is a disaster. He has no trouble condemning the killing of police officers, and eulogises the slain Dallas police officers even as he’s never done so for victims of police killing across the nation.

Yet at the same time, when he’s confronted about police violence, Obama says things like, “Black folks and Latino folks also carry some assumptions.” In his recent town hall meeting, the president further went on to equivocate that, “You may see a police officer who’s doing everything right, and you already assumed the worst rather than the best in him, and we have to guard against that as well” – as if civilians wield the same power as police.

If we are to end this cycle of violence, we must cease this fiction that somehow the feelings of the oppressed or their protest tactics are the real problem and not that which they are protesting: the systematic killing of black people made manifest by police violence.

Similarly, we cannot only look at the children made into orphans when their cop parent is killed: we must equally care about the children made into orphans when a cop kills their parent. I was reminded of this when I realised that Sunday also marked two years since Eric Garner was subjected to a prohibited chokehold here in New York, said “I can’t breathe” 11 times , and died by homicide . Garner left behind six children and three grandchildren who have never seen justice – and we must care about them no less.

We also have done shamefully little to change the violent flow of military war equipment to local police departments, nor have we done anything to change the proliferation of guns into the hands of the American public.

This, too, has to change.

I was naive to think anything would change in the few weeks I was away. But if we don’t start urgently asking new, bigger questions, we are going to be stuck with the same stories of violence – happening within the same cities – until too few of us are even left alive to read or write about them.

Steven W Thrasher is writer-at-large for Guardian US.

1 Paraic O’Donnell: MS is meticulously destroying me. I am being unmade
2 Varadkar says Sinn Féin and Fianna Fáil should form coalition
3 ‘Exposure doesn’t pay bills’: What artists say about freebie culture
4 ‘My new greatest fear – losing my child – colours everything in the day’
5 Council writes to Taoiseach over white-water rafting comments
Real news has value SUBSCRIBE