Noel Whelan: Auction politics are back with a vengeance 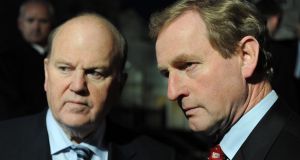 Trying to spin it both ways

Reading many of the pre-budget headlines in recent weeks I was reminded of an exchange I had with a member of the audience at the MacGill summer school in July.

During a presentation at a session about scenarios for the next election I had warned that, although we are just emerging from the nightmare of a recession, our political parties were already sleepwalking back into auction politics.

I argued that instead of any real assessment of what our tax or spending priorities should be now that we are in recovery, political parties were offering goodies to targeted sectors of the electorate, those most likely to deliver returns in votes.

When the microphones were handed around for questions a man at the back of the hall took issue with the suggestion. He wanted to apologise for “introducing some facts into the debate” but the current Government was not engaging in auction politics.

The Government, he said, planned to increase spending by 1 per cent in 2016, and “if it is an auction it is a modest auction”.

He reassured us that things were different now because “people have learnt lessons” and we now have EU rules which restrict government expenditure.

I thought initially the contributor was one of those retired civil servants which the MacGill school is sometimes caricatured for attracting but then realised that it was a serving civil servant, and a senior civil servant at that. It was none other than the current secretary general of the Department of Public Expenditure.

It is worth noting that it was strange that a senior civil servant would feel the need to intervene to defend the Government at what was clearly a politically charged session, especially when there were several Fine Gael and Labour councillors in the room.

More importantly, however, the intervention reflected a narrative that the current Government, and it seems those who advise it, want to get across.

They are very anxious for us all to accept that because they are not throwing as much money around as the previous crowd they could not possibly be engaging in auction politics.

What I replied then is worth reiterating now.

Firstly, any expenditure increases or tax giveaways at this time, even if small relative to those of previous governments, come not from current income but are added to the national debt. It is something our children will pay for.

That is why the Fiscal Council and others have urged something approaching a neutral budget notwithstanding that fact that a positive budget is permissible within the EU constraints.

More importantly, however, I pointed out that whether expenditure and tax policies amount to auction politics is not just determined by the quantity of monies which the parties are promising to dole out. It is shaped by the manner in which they propose to do so.

In the few weeks since MacGill our newspapers have been full of stories of expenditure increases or tax reliefs which the Government is promising for the next budget.

The Government is trying to spin it both ways. On one hand the Minister for Finance and the Taoiseach make speeches about how they are going to be restrained and that they are not engaged in “showtime”.

On the other hand, in off the record briefings, the Government has been ratcheting up the sense that lots of goodies are on their way, especially for middle-income earners.

The spindoctors have been particularly busy with the weekend press. One only has to look at recent editions of the Sunday newspapers to see that.

“Coalition plan 2pc USC cut in election gamble” was the front-page story in the Sunday Independent earlier this month with the sub-headline “€1,000 a year bonus for those under €70,000”.

Among the headlines on the front page of the Sunday Business Post on recent Sundays have been been the following: “Business and farmers to gain in budget”, “Property tax to be frozen as budget give-away begins”, “Government set to unveil new tax cuts for small firms”