‘We will not stop saving lives, because on our shoulders we have centuries of civilisation’ 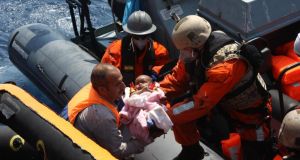 A migrant is carried aboard the Germany navy’s frigate ‘Hessen’ earlier this month, before being brought to the port of Palermo, Sicily. EPA/GERMANY NAVY

The search for peace and food that is forcing thousands of women and men, often with their young children in tow, to risk their lives reaching Europe didn’t begin today, and it won’t end tomorrow. Anyone who thinks this crisis can be solved with a tweet or a Facebook post lives in a parallel universe.

The history of humanity has been marked by migration flows, but it is fear that allows shallow demagoguery, and sometimes open racism, increasingly to inhabit Europe’s politics – to the extent that it has been the decisive factor in several recent elections.

But we must respond to fear with political courage.

The country I represent, Italy, has saved countless human lives over the past months. I’d like to pay tribute to the women and men, both military and civilian, who even now are displaying solidarity and courage in keeping our fellow human beings alive. Aboard the ships of our navy and coastguard, three babies have been born in the past six months.

These “angels of the sea’’ are making Europe a better place. I used to be the mayor of Florence. The identity of this great region stems from the masterpieces of past geniuses, from Michelangelo to Leonardo, from Galileo to Brunelleschi, from the Uffizi to the Palazzo Vecchio. But when I used to speak to elderly people in cafes or in the streets, they would tell me that the thing they were proudest of wasn’t the ancient masterpieces, but having helped to save lives and protect artworks during the flood of 1966.

However, while lives are being saved we also know that there isn’t enough room for everyone. Whoever has the right to asylum must be welcome in Europe, not just in Italy, despite the EU’s Dublin regime. But it is inconceivable that one country should tackle the entirety of this problem on its own. Responsibility and solidarity are concepts that go hand in hand.

Anyone who doesn’t have the right to remain in Europe must be repatriated. And in those countries, the European Union – including Italy – must do more in terms of providing aid, to support international development projects, and cultural and technological exchange programmes.

But Europe must have a strategy. And it needs to be clear. Today’s uncertainty will lead to tomorrow’s problems. This is what happened in Libya, where intervention put an end to a brutal dictatorship, but that intervention wasn’t followed up with a strategy to deal with the aftermath. We are, as a consequence, now paying the price of this failure. More than 90 per cent of migrants to Italy leave from a Libyan coast that is no longer guarded by the government.

Today’s problem isn’t about Italy facing this emergency alone. We’re a great country that will not fall into hysteria just because one year we have a few thousand more refugees than expected. If forced to do it alone, we would not shy away from the challenge. We will not stop saving lives, because on our shoulders we have centuries of civilisation. We will not turn our backs on that just to improve our ratings in the opinion polls: human life matters more than approval.

However, an EU-wide response is needed by Europe far more than it is needed by Italy. Italy could go it alone in the Mediterranean. But it’s Europe that cannot afford to let this happen. That’s the political point. It’s Europe that needs to demonstrate the values it believes in and stands for. Europe isn’t a bundle of economic ties, it’s a community of people, a shared destiny, and ideals. If this common purpose is diminished, we lose our European identity.

If selfishness and fear prevail, we risk losing the noble idea underpinning the European project

We want to fight for a set of values, for civility and peace. This is why the European Union was founded – not for bond spreads and stability pacts, but for these values.

If we ignore them now, while the Mediterranean seethes, and children drown, it is Europe itself that we lose.

We are at a crossroads and we need to decide if events in the Mediterranean are everyone’s problem, or only that of the countries in the region. If solidarity and responsibility prevail, solutions can be found: from the number of people to be admitted, to identification and readmission operations, and funding.

However, if selfishness and fear prevail, we risk losing the noble idea underpinning the European project.

For my generation, Europe’s identity begins with the fall of the Berlin Wall. I was 14 at the time. Today, my son is 14 and I don’t want the symbol of European identity to be a wall between Hungary and Serbia, nor a wall of distrust between the countries of Europe.

We need clear rules, and we need to respect them. Anyone who has the right to stay must be welcomed, and anyone who doesn’t should be sent home.

But everyone must be saved and helped. For us, for Italy, Europe should be a beacon of civilisation, not a wall of fear.

Matteo Renzi is the prime minister of Italy

1 Operator rejects claims by Dr Tony Holohan that car parks are full
2 BOI customers to be charged twice with bank fees on New Year’s Eve
3 Taoiseach says Government to weigh benefits of visitor restrictions when planning lockdown exit
4 Irish designer of Oxford vaccine : ‘I’ve never worked so hard in my life’
5 Somebody needs to explain sovereignty to Johnson before it is too late
Real news has value SUBSCRIBE