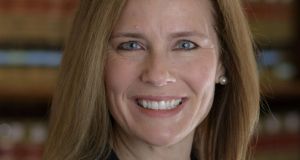 As predicted, the temperature is rising around president Donald Trump’s pick for nominee to take retiring Justice Anthony Kennedy’s seat on the United States Supreme Court.

One of the names attracting particular attention is Amy Coney Barrett, a 46-year-old judge of the US Court of Appeals for the seventh circuit. If confirmed, she would be only the second female Republican-appointed Supreme Court justice.

This candidate seems to be living the feminist dream: a mother of seven children (two of whom are adopted from Haiti; another – the youngest – has special needs), a graduate of and professor at the prestigious Notre Dame law school (the unanimous verdict of the faculty is that she is a “brilliant teacher and scholar”), a former clerk for a Supreme Court justice (the late Antonin Scalia), she also practised in a top-flight law firm in Washington, DC – yet there has been no rush by feminists to support her.

You see, there is a problem: Barrett is Catholic. Not just Catholic, but actually Catholic, one of those people who seems to take the teaching of the church seriously – almost like she really believes it. This seldom plays well in the media.

In Ireland, as elsewhere, the media like their Catholics served lukewarm. Take the recent fêting of Josepha Madigan, who has been outspoken about her own Catholicism. The catechism of the Catholic Church states: “Since the first century the church has affirmed the moral evil of every procured abortion. This teaching has not changed and remains unchangeable.”

This is the sort of Catholicism that wins media favour: the kind that undermines the church’s core values. It is somewhat ironic that, on the day when Madigan recently made a rush for the altar at her local church, the first reading included the text: “Before I formed you in the womb I knew you.”

Barrett is cut from a different cloth, and because of this she has been traduced by so-called liberals. In the course of the confirmation hearings for Barrett’s appointment to the Court of Appeals, Democratic senator Diane Feinstein challenged the nominee by putting it to her that “the dogma lives loudly within you, and that’s of concern”.

This example of barely concealed religious bigotry drew criticism at the time, even from some on the political left, but now that Barrett is in the frame for the Supreme Court, much the same point is being made by many others, often with even less subtlety.

It is not at all clear that if Barrett were appointed, Roe v Wade would be overturned

As Harvard Law professor Noah Feldman has pointed out, there is a rich history of anti-Catholic sentiment in the US. However, the proposition that Barrett – or any Catholic – is incapable because of her religion from carrying out her judicial oath is bogus.

Some point to a scholarly article co-authored by Barrett as a student as evidence that she might place her own beliefs above the law, but this does not hold up. The article is a nuanced reflection on the circumstances in which it might be permissible for a Catholic judge to recuse himself from imposing a death sentence – something you would think liberals might understand.

Furthermore, at her nomination hearing for the Circuit Court last September, Barrett was emphatically clear that the law takes precedence over a judge’s personal beliefs when it comes to how a case should be decided.

Feinstein’s aggressive questioning at that hearing exposed her violent disagreement with church teaching, particularly on abortion – and her fears that Barrett has different ideas.

Despite the senator’s fears, it is not at all clear that if Barrett were appointed, the famous case legalising abortion in the US – Roe v Wade – would be overturned. The doctrine of precedent, by which courts must pay respect to earlier judicial decisions, generates a kind of institutional inertia – a conservatism, if you like – that militates against sudden changes in direction. One of the ironies of the current frenzy is that so many so-called progressives are now those calling loudest for judicial restraint.

That Barrett should have views on matters such as abortion is hardly surprising. Almost everyone does. Judges are people too, after all. As William Rehnquist, a former chief justice of the US Supreme Court, once pointed out, proof that a justice’s mind at the time that he or she joined the court was a blank slate “would be evidence of lack of qualification, not lack of bias”.

At least what a Catholic believes is public. There is a creed and a catechism that may be consulted. Not so for many others, whose conscience is guided by principles and preferences known only to themselves, and capable of unilateral and secret alteration. Yet it is Catholics who are treated as suspect.

I do not know Amy Barrett, but I am full of admiration for a woman who has reached the highest levels of her profession while maintaining her faith and her dignity in the face of unrelenting criticism. If she is nominated to the Supreme Court on Monday, her confirmation for the seventh circuit appeals court will seem like a picnic compared with what is in store for her.

Maria Steen is spokeswoman for the Iona Institute

1 When Anthony Clare met ‘calculating, disturbing’ Jimmy Savile
2 Woman stranded in Ireland due to pandemic has ‘miracle baby’
3 US election: ‘Donald Trump needs to go. White America got what they want’
4 Seán O’Brien: Anger over my parents’ break-up never left me
5 Sacha Baron Cohen: ‘I had to ring the alarm bell and say democracy is in peril’
Real news has value SUBSCRIBE