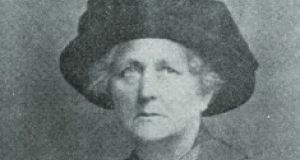 Aleen Cust: first woman to become a veterinary surgeon in the UK and Ireland

The first woman to become a veterinary surgeon in the UK and Ireland was Irish and was born 150 years ago on February 7th.

By her achievement, Aleen Cust not only overcame barriers of tradition and sexism but she courageously opened up a career path for women that had been previously closed to them.

She was born into an aristocratic family (with royal connections) in Cordangan Manor near Tipperary town. As a child, she loved the outdoors and later claimed that when she was asked what she wanted to be, “a vet was my reply ever and always”. Her father, a land agent for the Smith-Barry family, died when she was just 10 and her mother took the family of four boys and two girls to England.

Her biographer, Connie Ford, speculated that her education was probably more liberal than most girls of the time; because of her straitened economic circumstances, her mother probably let a tutor teach her and her brothers rather than hire a governess specifically for her.

She trained as a nurse at London Hospital but her guardian encouraged her childhood dream of becoming a vet by paying for her to attend New Veterinary College in Edinburgh – against her family’s wishes. She enrolled there as “A.I. Custance” to avoid any potential embarrassment for her family (her mother was a Woman of the Bedchamber to Queen Victoria).

She completed her veterinary studies in 1897, winning a gold medal in zoology, but was not allowed sit her final exam and thus could not become a member of the Royal Society of Veterinary Surgeons (RCVS). She challenged this in an Edinburgh court but it refused to rule as the RCVS was not based in Scotland; she did not challenge it in London, perhaps because of the cost involved or to spare her mother any possible embarrassment.

With a letter of recommendation from William Williams, founder of the New Veterinary College, she got work in the practice of William Byrne (a member of the council of the RCVS at the time) at Athleague, Co Roscommon.

Her entry in the Oxford Dictionary of National Biography suggests that she and Byrne “lived as man and wife” and had two daughters, born in Scotland, who were later adopted, but her biographer discounted this as unfounded rumour.

In 1904, she was briefly engaged to Bertram Widdington, the son of her former guardian, but the marriage did not go ahead.

Various reasons have been suggested, such as that his family objected to her unconventional career or that she was not prepared to give up her practice and move to India with him.

She was appointed veterinary inspector by Galway County Council but the RCVS objected as it did not recognise her officially. She was again selected when the post was readvertised (apparently local practitioners did not apply in order to give her a free run) and a compromise was reached whereby her position was “inspector” rather than “veterinary inspector”.

The Ballinasloe Western News didn’t like the appointment and wrote: “The county council have made an appointment in the horse and brute kingdom which appears to us at least disgusting, if not absolutely indecent . . . We can understand women educating themselves to tend women – but horses! Heavens!”

Following William Byrne’s death in 1910, she took over his practice. According to her biographer, she charged wealthy people £1 to £2 per visit but gave money to poor clients and provided the children’s hospital in Dublin with milk from her herd of goats on a monthly basis.

She volunteered for the front in early 1915 and appears to have aided the Veterinary Corps in the care and treatment of warhorses. She was later appointed to an army bacteriology laboratory and is listed as a member of Queen Mary’s Army Auxiliary Corps for 1918.

When the Sex Disqualification (Removal) Act came into law at the end of 1919, the RCVS could no longer refuse to recognise her right to practise. She sat her final exams (given her years of experience, she was asked to take only the oral parts) and received her RCVS diploma on December 21st, 1922, the college’s president personally presenting her with it. She thus became the first female veterinary surgeon in Britain and Ireland.

Because of failing health, she continued to practise for only another two years, when she sold her practice and moved to the New Forest in Hampshire in England. She died from heart failure in Jamaica on January 29th, 1937, while visiting friends.

She left £5,000 to the RCVS to found the Aleen Cust Research Scholarship, with the wish that if candidates were of equal merit that the council, when deciding between men and women, would award the scholarship to women.