Snowmen and sledging were the order of the day in the Dublin suburbs, as snow blankets the city. Video: Bryan O'Brien 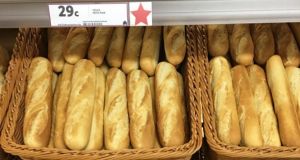 Sir, – Anyone who gave up bread for Lent must be feeling exceptionally smug right now. – Yours, etc,

Like the camel, it comes under the general heading of “difficult to define but easy to recognise”.

It may suffice to give an example.

My all-time favourite is the trip up to see the Sally Gap in Co Wicklow, which some idiot seems to be compelled to make whenever bad weather is forecast! – Yours, etc,

Sir, – When we were kids, a yellow snow alert had a different meaning. – Yours, etc,

Sir, – I took a Number 14 bus into work in Dublin this morning. I was greeted by a friendly driver, and we all got into work safely.

The powers that be need to think again before we ban buses from the city centre. – Yours, etc ,

Sir, – Remember when we were advised to plant tropical plants in the expectation of global warming? – Yours, etc,

Sir, – Did anybody else notice how the weather has grossly deteriorated since the establishment of the National Emergency Co-ordination Group for Severe Weather?

Even the name would make you nervous and shiver in the sunshine.

In the good old days there was snow in the morning when you woke up, or the wind at night caused you to toss about in the bed and wonder if the front door would blow in.

Now with the advent of our National Emergency Co-ordination Group for Severe Weather, we have 24/7 advanced warning, giving us all ample time for hysterical panic and acting irrationally.

The mountain of mouldy bread that will be thrown out in the next few days is testament to that! – Yours, etc,

Sir, – In 1947 I spent hours shovelling snow so that my father, a dispensary doctor, could drive in the gate. The following day he went out on his horse to see his patients as the roads were impassable. In 1962 I drove to Kells, collected my girlfriend, who is now my wife, and went to a dance in Finnstown House, Lucan. There was very heavy snow on the way, with high drifts on the way home. We got to Dunshaughlin, and I put my girlfriend to bed (separate room, separate bed, no hanky-panky those days). In 1982 I drove to Julianstown to collect my sons from a party, in heavy snow with three- to four-metre drifts, and we were marooned in Duleek for three days, with all roads impassible. This year we have “chaos” with three to five centimetres of snow. Times have certainly changed. – Yours, etc,

Sir, – I normally take the scooter to work. This morning I took the bus. It arrived on time at 6.50am. The driver was pleasant and it arrived in Rathcoole on time. What a wonderful service from a State-owned company. – Yours, etc,

Sir, – The Beast from the East? Boris Johnson? – Yours, etc,

Sir, – Could the nanny state please go to bed early. And don’t get up until the storm has passed! – Yours, etc,

Sir, – The National Emergency Coordination Group does not have quite the same ring to it as its UK counterpart, the Cabinet Office Briefing Rooms Committee, or Cobra. Might I suggest a few alternative titles for this worthy committee – the Snow National Advisory Group (Snag), or Planning Emergency Response Team (Pert), Planning Limitation Outrageous Weather (Plow), or my own favourite – the Standing National Organisational Response to Emergencies (Snore). – Yours, etc,

Sir, – The inability of the Irish people to plan for bad weather has been demonstrated once again by the fact that every supermarket was sold out of bread over the last two days, and not a single supermarket was sold out of toilet paper. So if we do all get snowed in for several days at the end of this week, people will presumably be wiping their backsides with all the stale sliced pans they have lying around the house. – Yours, etc,