Joe Humphreys: Stop kidding yourself, you have no human rights 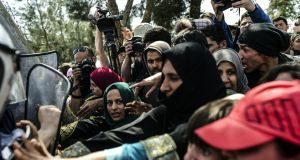 Migrants and refugees clash with riot police during a protest to call for the reopening of the borders at their makeshift camp in the northern border village of Idomeni, on April 7, 2016. A plan to send back migrants from Greece to Turkey sparked demonstrations by local residents in both countries days before the deal brokered by the European Union is set to be implemented. / AFP PHOTO / BULENT KILIC

“The conception of human rights based upon the assumed existence of a human being as such broke down at the very moment when those who professed to believe in it were for the first time confronted with people who had indeed lost all other qualities and specific relationships - except that they were still human. The world found nothing sacred in the abstract nakedness of being human.”

When the political theorist Hannah Arendt wrote these words in ‘The Origins of Totalitarianism’ in 1951 she was making no abstract claim.

A German-born, secular Jew, she was interned in France during World War II and saw up close the “the monstrous conditions in the transports to the camps, when hundreds of human beings are packed into a cattle-car stark naked, glued to each other, and shunted back and forth over the countryside” to be tortured and then executed.

The experience led her to proclaim the “end of the rights of man” - denying the optimistic sentiment of the Universal Declaration of Human Rights signed by world leaders after the Holocaust in a spirit of “never again”.

Today her words echo with force across Europe. As we watch Greece deport refugees back to Turkey under an EU-sponsored migration deal, the sick joke that are “universal human rights” is laid bare.

Like the “international community”, the unalienable rights of man are an illusion - a con trick. They fool us all into thinking we can lay claim to our freedom by words alone.

In this country, we talk about the right to water, the right to strike, the right of 1916 relatives to be consulted on Rising commemorations, the right to choose, the right to services. But none of these are human rights. They are selective entitlements, goods and indulgences - some granted, others not - to be negotiated between citizen and state.

How could we possibly have an unalienable right to tap water when, according to Save the Children, refugees fleeing the conflict in Libya are resorting to drinking their own urine while being detained by traffickers?

How could we possibly have a human right to strike when those displaced by conflict and terror (and those waiting for their asylum applications to be processed here) don’t have the opportunity to work?

How could there be a universal right to political consultation when millions of displaced people across the globe have no state to consult?

Either human rights are for everyone, or they are for no one. If they are universally bestowed on humanity they can’t be bargained away by governments, or reduced to the gift of a Vladimir Putin or Viktor Orban, Hungary’s anti-Muslim prime minister.

We can’t pretend not to know what’s going on. The UN’s refugee agency (the UNHCR) and Medecins Sans Frontieres have pulled staff out of Greek reception centres, citing insufficient safeguards.

Peter Sutherland, the UN secretary general’s special representative for migration, has questioned the legality of the deal, pointing out that deporting people without considering their asylum applications would break international treaties.

According to the UNHCR, Greek police “forgot” to process the asylum claims of 13 of 202 asylum seekers who were sent back to Turkey on day one of the operation on Monday - hardly an auspicious start. According to the Greek asylum service, only 30 of 400 migration officers from other EU countries have arrived to help process applications.

As for deportations from Turkey to Syria, the second leg of the EU deal, these have already begun with scant evidence of proper safeguards.

An Amnesty International report last month cited one case in which three young children were forced back into Syria without their parents. A woman who was eight months pregnant was also forced to return. Amnesty said many of those deported appeared to be unregistered refugees.

The politicians say we should give the deal more time before passing judgment. But time for what? By the EU’s own admission, this operation is in lieu of a comprehensive migration and resettlement plan, let alone a strategy for conflict resolution.

If we’re going to stand over this deal, fine, but let’s not stop playacting about rights.

In the last century, Arendt witnessed how those without a state were “expelled from humanity”, and the same applies today.

Slavery is better than being stateless, she wrote, as “to be a slave was after all to have a distinctive character, a place in society more than the abstract nakedness of being human and nothing but human”.

Think about that the next time you bleat about your right to something. Think about what’s being done to refugees in your name. Their vulnerability is ours.

1 Fintan O'Toole: Prince Philip - asylum-seeker and citizen of nowhere, but rich and white