Ireland can and should accept refugee children 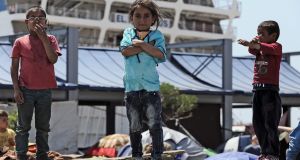 Children stand on top of a track at a makeshift refugee camp at the port of Piraeus. EPA/SIMELA PANTZARTZI

Last week TD Mick Wallace told the story of a 15-year-old refugee whom he met in Calais. The boy’s parents and siblings had been killed in Afghanistan. Wallace asked the Dáil if Ireland could become a “champion” of unaccompanied minors. In short, the answer is: yes, it can.

Ireland has a history as both a sender and receiver of unaccompanied minors, defined as children outside their country of origin who are separated from their parents or legal guardians. In 1892, Annie Moore, an unaccompanied minor from Ireland, was the first person to be registered on Ellis Island. In 1946 and 1947, more than 400 children were brought to Ireland by the Irish Red Cross under Operation Shamrock, with many of these children being placed in foster care.

Since the mid-1990s, unaccompanied minors have come to Ireland from countries including Nigeria, the Democratic Republic of Congo, Syria, Afghanistan, and Iran. Most sought asylum and were placed in the care of the State.

If our island had a different location, we would be at the coalface, to respond immediately to refugees and migrants, including unaccompanied minors, arriving by boat or on foot each day. Instead, we have the luxury of be able to choose how we will respond, including who we will allow to be relocated to our country.

Unaccompanied minors who are stranded in camps in Europe and beyond can and should benefit from the care system we have in place. We have the capacity to make a difference in the lives of so many children and young people. We can choose to be champions. But we need to make this choice now and act quickly.

Research on unaccompanied minors in foster care shows that young people were overwhelmingly positive about their experiences. In relation to the shortages, the refugee crisis has “caught the imagination” of many people, something which can be harnessed. A targeted recruitment campaign looking for foster placements for unaccompanied minors would bring many more individuals and families on board.

In terms of social work support, Tusla’s team for separated children seeking asylum is long established, hugely experienced and is committed to providing for the needs of unaccompanied minors. This team could easily be expanded. Thus, in my view, we have the capacity to provide consistent social work support and stable placements.

Outgoing Minister for Justice Frances Fitzgerald talked about prioritising the plight of unaccompanied minors last September when Ireland’s participation in the resettlement and relocation schemes was announced. That was eight months ago. Imagine how long eight months must feel to a 15 or 16 year old trying to survive in Calais or Lesbos, waiting, unprotected, not knowing what the future holds, with no control over the present and unable to think about the past.

Presumably much detailed and well-meaning planning is being done behind the scenes in an effort to ensure that when unaccompanied minors arrive, we get it right. However, a determination to get it right may result in us getting it wrong. While the planning takes place, unaccompanied children are drowning and others are disappearing into the hands of exploiters. The “lucky” ones are waiting in hope, with little care or support, with this hope diminishing by the day.

Earlier this week the British government, under pressure from its own backbenchers and other MPs, reversed its position and committed to taking more refugee children from Greece, France and Italy.

Now is the time for Ireland to act for the benefit of these young people. Will the care we provide be perfect? No, it will not, no matter how much planning we do. Stakeholders will at times criticise and advocate for improvement. Services will be challenged and resources further stretched. At times, we will muddle through. A perfect package of care is unlikely to be provided to these young people. But an imperfect package is better than none at all.