How we could have a national health service in Ireland 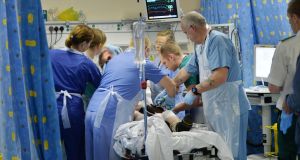 All countries with an NHS have put in place a strong legal framework to ensure that a universal national health service happens and that parliament commits to it. Photograph: Alan Betson

The decision to have a universal public healthcare system is always political. Many countries have decided that universal health care (access to services on the basis of need and free at the point of delivery) is the hallmark of a civilised society and that it is both necessary and affordable for governments to legislate for its citizens to that end.

The question of how much any country should spend on public healthcare is inextricably linked to the chosen model of funding and provision, the degree of marketisation and how much risk selection and denial of care a government is prepared to tolerate in its health system.

There is no country in the world that has delivered universal healthcare through a market and for-profit provision or private insurance. This is because markets operate through selection and exclusion, transferring risks and costs back to the users of services and denying care to those that need them most.

Those countries that have adopted the US model of mixed funding (public and private), together with public and private provision, have more marketisation, higher administration costs, the greatest inequalities in access and health outcomes, lack of coverage, and highest out-of-pocket payments.

The UK put in place its National Health Service in 1948, as a universal integrated public health system free at the point of delivery and funded through central taxation.

Central taxation is the fairest and most efficient way of funding. The legislation and the system became the model for many countries’ health systems across the world. The UK NHS had the lowest cost, and the most efficient and fairest system, guaranteeing healthcare to all its citizens without fear of catastrophic costs or being denied care.

In 2012, following two decades of market incrementalism, the government abolished the universal public model by abolishing the duty on the secretary of state to provide key health services throughout England. Instead it has made commercial contracting virtually compulsory; has introduced new mechanisms for fragmenting and dismantling care and reducing services; and has made foundation trust hospitals structurally 49 per cent private thereby diverting their focus to private income.

US-inspired risk-selection mechanisms have been introduced (including the switch to membership-based organisations, trusts, tax breaks) with catastrophic consequences for universal public healthcare.

Scotland and Wales have retained the universal single-tier integrated public NHS model. However, the Westminster UK treasury controls the funding through the block grant allocation which puts their systems under severe pressure.

In England, 75 per cent of foundation trusts are in serious financial deficit; in contrast, no hospital in Scotland is going to the wall. This is because hospitals and community services are integrated into and directly managed by the health boards which in turn are accountable to and responsible for all people living in their area for planning and ensuring local health needs are met.

It has been argued that incrementalism may be the best strategy for Ireland. I disagree, the pace of change will be too slow and may go in the wrong direction: since 2008 there has been an erosion of entitlements (meanstesting of the medical card in 2009) and an increase in the level of co-payments/charges for some services, notwithstanding the extension of the GP visit card in 2015.

Of course, every country must build on existing infrastructure and take account of its own history of services development.

My understanding is that given the commitment (by the Oireachtas committee on the future of healthcare) to articulating a vision of universal single-tier health service, an NHS Bill for Ireland is the essential first step in a 10-year plan.

If a law is enacted which commits the government to providing universal healthcare to all citizens, parliament will decide how much it will spend. It is the task of the administrative bureaucracy to determine how the functions will be implemented and to ensure that resources are allocated fairly and appropriately according to needs.

A bottom-up approach can be adopted. Access to universal healthcare requires strong systems of public administration and adherence to six common principles: fairness of financing; fairness of resource allocation; risk pooling and social solidarity in service provision; political accountability and control; service integration through geographic units of administration; and public accountability through strong systems of information and surveillance systems.

As the committee has heard from the IMO, experts and other organisations, it is the primary care teams including general practitioners which are the gatekeepers to acute and specialist care and have a major part to play in prevention, rehabilitation and working with social services.

A strong primary care and social care system rooted in strong information systems is essential to ensure healthcare for all.

Primary care is seriously underfunded and under capacity, with very high costs for those not covered by the GP visit card and this creates pressure on acute services, social services and the family.

A Bill to give the legal framework for a national health service throughout Ireland is essential and is the necessary first step towards achieving the sustainable development goals for universal healthcare and access to rational and essential medicines. Allyson Pollock is Professor of Public Health Policy & Research at Queen Mary University of London. This article is based on her address to the Oireachtas committee on the future of healthcare