Fintan O’Toole: Three-state union may be answer to Brexit 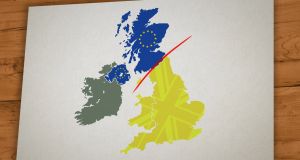 The people of three of the five parts of These Islands (Scotland, Northern Ireland and Ireland) now see their relations with the rest of the world in one way while those of the other two (England and Wales) see them very differently.

Welcome to SCINI. There is no good name for the Atlantic archipelago we inhabit: These Islands seems to be about the best we can manage without causing offence to someone or other. But, as Theresa May was reminded on her visit to Belfast yesterday, the shape of These Islands is shifting. The people of three of the five parts (Scotland, Northern Ireland and Ireland) now see their relations with the rest of the world in one way while those of the other two (England and Wales) see them very differently.

The new division is, of course, created by Brexit, and it forces the three parts of These Islands that wish to remain in the European Union to think very radically about how they relate to each other. To think, that is, about a new union – of Scotland, Ireland and Northern Ireland: SCINI.

This is crazy talk, but sometimes history forces us all to think urgently about ideas that were previously the exclusive property of cranks. The idea of SCINI runs up against one of the basic principles of the international order since 1945 – that existing borders and states must be accepted as having arrived at their final point of evolution. It also disturbs the nationalist ideal that states are “natural” expressions of ancient nationhood.

But of course states are neither natural nor fixed. They are human inventions, imagined into existence and subject to all the dark and light forces of history.

These Islands are a prime example of this fluidity. At various points in our common history, we have been parcelled up in many different ways. An English-dominated United Kingdom may be the one that looms largest in the current imagination, but there have been, on the archipelago, borders between the Roman empire and barbarians, multiple English kingdoms, Scandinavian colonies, Irish kingdoms that included large parts of Scotland, Irish colonies in Wales, Anglo-Norman lordships that stretched to France, and so on.

And shifts can happen quickly. In the upheavals of a century ago, two entities that had never been previously envisaged or desired – a 26-county Ireland and a six-county Northern Ireland – emerged quite suddenly.

Most interestingly in the current context, the dominant part of These Islands, England, has (to its great credit) conceded that the political architecture of the archipelago is radically open-ended. It did this in the Belfast Agreement, which accepts that Northern Ireland’s membership of the United Kingdom is contingent and purely voluntary. And it did the same for Scotland when David Cameron accepted that the results of the referendum on Scottish independence would be binding on the UK as a whole.

With these concessions, the UK itself became an avowedly contingent entity, subject to the wishes of democratic majorities in two of its constituent parts. This is enormously important because it means change can be peaceful and consensual – a privilege that history seldom offers.

So the current political shape of These Islands carries an asterisk: terms and conditions apply. The most important of these conditions is consent. And for all May’s admirable emollience, the question of consent is unavoidable and implacable. Leaving the European Union is not a detail of policy – it is a seismic and historic shift in political identity. The people of Scotland and Northern Ireland do not and will not consent to that shift. And the people of the Republic were not, of course, asked to consent to changes that affect them so profoundly.

We know on this part of the archipelago what lack of consent to political structures looks like. We know how bad and bitter its consequences may be. Northern Protestants did not, on the whole, consent to Irish Independence – and that was enough to wreck the dream of an Irish Republic.

And Northern Catholics did not, on the whole, consent to being placed in a sectarian statelet with an inbuilt Protestant majority. These problems of consent have never gone away, even though the Belfast Agreement made real progress in thinking about how to contain them.

Will lack of consent to being taken out of the EU have the same kind of power to reshape the identities of Scotland and Northern Ireland? That depends on how bad the fallout from Brexit gets. If it’s very bad indeed, resistance to it could well become the defining question for Scotland, Northern Ireland and, by extension, for the Republic. That common interest is what would make the unthinkable not just thinkable but enormously attractive.

SCINI may be the only long-term solution to Northern Ireland’s problem of double identity – the “British” part of that identity has always been much more Scottish than English. It may also be Scotland’s only way to stay in the EU. And it may be the Republic’s only way to avoid the reimposition of an internal border on the island.

SCINI would not, of course, be an old-fashioned unitary state. It would have to be accompanied by radical thinking about what it means to be a democracy in the 21st century, one that might even reconnect with the great Scottish traditions of republican thought that so profoundly influenced the United Irishmen. For that alone, we need to think ourselves SCINI.

1 Gardaí believe men in Cork murder-suicide chose to let woman survive
2 Richard Ford: America could fail. I have never felt this way before
3 ‘In Crete I pay 70% of what I paid for a shoebox apartment in Dublin’s docklands’
4 Supermarkets compared: How Dunnes, Lidl, Tesco and M&S measure up
5 Jack Nicklaus’ Trump endorsement leads to avalanche of dismay
Real news has value SUBSCRIBE