‘There is ignorance behind the well-intentioned ‘Save Moore Street’ slogan’ 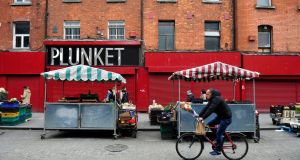 What remains in Nos. 14- 17 is significant and evocative; the restoration of these buildings, showcasing their 18th century features and allowing visitors to see the 1916 attempts to tunnel between the houses, will make it a significant attraction and permanent monument to the status of Moore Street in the 1916 story. Photograph: Aidan Crawley

As a rallying cry, “Save Moore Street” seems compelling as the centenary of the 1916 Rising approaches. The cry has been adopted by various politicians and protestors who claim that not enough is being done to preserve the street where the Rising leaders made their last stand.

Dig deeper, however, and there is hollowness to the slogan that does scant justice to the complications associated with a street neglected for decades. These include the different responsibilities of local and central government, vested private interests, conservation architecture, and conflicting witness accounts of what went on in Moore Street towards the end of the Rising.

It is difficult to translate what occurred in the laneways of history into a complete narrative that is verifiable, but it can be confidently asserted that Nos 10 to 25 were occupied to varying degrees during the final stages of the Rising.

Shaffrey Associates Architects have specialised in the conservation of historic buildings since the 1960s. In 2005, the firm completed a weighty report for Dublin City Council assessing the architectural and historical importance of No 16, most likely the last HQ of the Rising. The report found that No 16 retains much of its original mid-18th century fabric and character.

While recognising that other Moore Street buildings were significant due to the events that took place within them, Shaffrey said Nos 20-21 “have been altered extensively since 1916 and retain little of the character of this time”. Due to that, “the substantially intact No 16 takes on a greater significance and the importance of its protection becomes more relevant”.

In 2006, Nos 14-17 were designated a national monument by the government. The following year, a preservation order was placed on them.

Shaffrey Associates and archaeologist Franc Myles compiled another dense report in 2012 for Chartered Land, the owner of Nos 14 to 17. This report was in response to a request for additional information after Chartered Land applied for ministerial consent to carry out works at Nos 14-17.

The report concluded that “the most significant survival is the row of 18th century houses which constitutes the national monument”, Nos14 -17. It also identified “the perception that much of the historic streetscape and fabric survives intact, although this is clearly not the case”. Of particular note are openings in the walls between Nos 14 to 17, which “retain a coherence”.

In 2014, Dublin City Council chose not to acquire Nos 14-17 when offered them in a land swap by Nama, which took control of Chartered Lands’ loans. So the Government bought the buildings from Nama for €4 million. This brought the national monument into public ownership and ensured its restoration.

I am no cheerleader for the Department of Arts and Heritage; it has failed to adequately communicate what is going on and should make the reports I cited above publicly accessible and explain why it paid €4 million for the buildings.

However, I also believe there is ignorance behind the well- intentioned “Save Moore Street” slogan. It is reductive and simplistic and avoids nuanced analysis of the practical problems of preserving intact large historic sites. It doesn’t appreciate the existing commitment to conserve the most significant buildings or the experienced hands – literally – that will do the necessary work.

Given their delicate state, the buildings need to be stabilised. This requires demolishing Nos 13, 18 and 19, which are essentially post-1916 structures. The contract for the work was awarded to Lissadell Construction, which specialises in heritage work (it has worked on the restoration of Kilmainham Court House). Lissadell is working closely with the OPW, the National Archives and the National Museum.

Talk of planned shopping centres and the desecration of sacred sites invites a neat narrative of contemporary philistinism. It ignores the consequences of decades of inactivity, land speculation, and the extent to which the city council is responsible for missed opportunities and has approved planning permission for large commercial development in Moore Street. The council, not the government, remains the development authority for the street.

At least the key buildings are now being preserved and in capable hands. Conservationists should be allowed get on with their jobs.