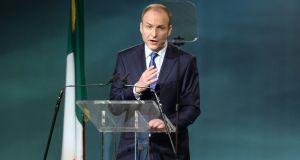 Fianna Fáil leader Micheál Martin continues to insist his party is “preparing for government”, but that it will not participate in a coalition with either Sinn Féin or Fine Gael. As the party’s Limerick TD Willie O’Dea elaborated this week, FF will not share government with Sinn Féin because it is run by the army council of the IRA, and will not share power with Fine Gael because this would place Sinn Féin in “pole position” to govern “on the next occasion”.

The dilemma for Fianna Fáil is that two negatives do not make a positive; they just leave an electorate scratching its head. What sort of government is it preparing for? Coalition with a much smaller Labour Party, along with independents, Renua, the Social Democrats, the Anti-Austerity Alliance and assorted others? Or is it fighting this election to remain the largest opposition party?

Given its mighty crash in 2011, it was inevitable that the attention would turn towards its options as a much smaller party. But the question has now become, are there any options at all, bar opposition? Historically, Fianna Fáil excelled electorally because of its devotion to what Breandán Ó hEithir in his Begrudger’s Guide to Irish Politics referred to as its “devotion to the essential dull details of how the bottom rung of the ladder to power is hammered into place”.

Much of this amounted to assiduous constituency work, national and local organisational networks, canvassing, compiling lists of supporters, ferrying them to polling stations and creating public momentum. The party perfected the art of electioneering and ran rings around its opponents with the scale of its attention to detail and the sweat of exceptionally committed volunteers. What was not in question was that there was a “ladder to power”. That there is little clarity as to where its ladder now leads, or if there are enough rungs on the ladder at all, is an indication of its crisis of relevance.

In September last year, Martin asserted a mantra he has frequently repeated: “We are a political party. My view is we have, as a political party, historically, traditionally, stood on the basis of our policy platform – and that’s what we’re going to do”. That is only partly true, however.

Historically, Fianna Fáil’s policy platform was very much secondary after it had established itself as the “natural” party of government in the 1930s.

When it did eventually swallow the coalition pill in 1989, what pained some party stalwarts as the dilution of the “core value” of single-party government became palatable enough, given its endurance as the largest party. That it is now in a position of defining itself by its opposition to Sinn Féin is a measure of its decline.

The elephant in the room of the Martin- O’Dea assessment of its options is its obvious compatibility with Fine Gael; there is not a jot of ideological difference between the parties, but that is ignored in favour of the focus on Sinn Féin.

When the party’s stalwart handler and former director of elections PJ Mara died last week, I was reminded of the extent to which the party thrived when, to use a favourite phrase of Mara, it was “Fianna Fáil versus the universe”. Given its reduced size, it is not pitching itself against the universe any more, just Sinn Féin, while Fine Gael marches on.

Historically, critics often felt FF displayed an insufferable arrogance, both in power and in opposition. When he was a minister in in 1973, for example, Conor Cruise O’Brien referred scathingly to “those who think of Fianna Fáil even in opposition, as in some sense the only legitimate government of the country”.

In truth, Fianna Fáil did not take a return to power for granted; members did the work on the ground to ensure that, come election day, no aspect of party organisation had been neglected; but what was not in doubt was its focus on government, a focus that can be legitimately questioned now.

In January 2011, when Martin became leader, I suggested: “His challenge is to respond credibly to these questions: what does Fianna Fáil stand for today? And can he, as leader of a soon-to-be much smaller and out-of-government Fianna Fáil, demonstrate that the party and its leader are relevant to the recovery of Ireland?”